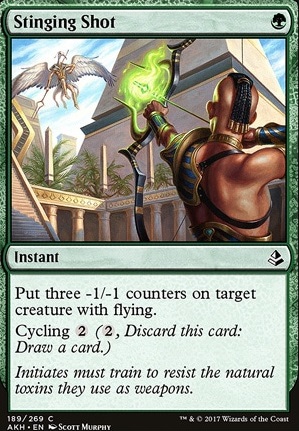 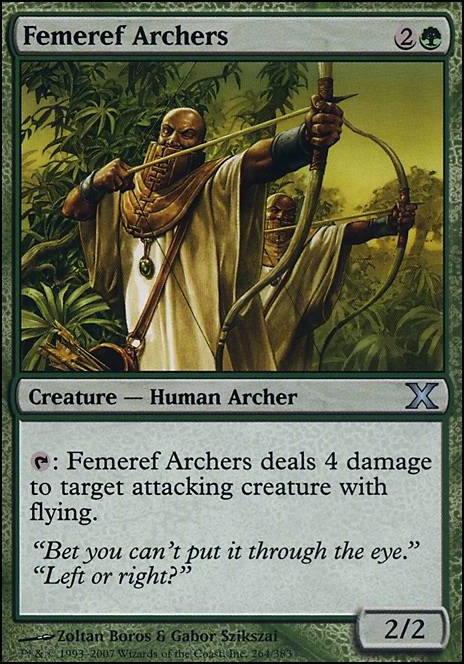 Funkydiscogod on how to deal with people ...

Also, if you want to annoy your opponent:

Sandwurm Convergence has the amusing side-effect of shutting down Vampire Nocturnus .

Elegant Edgecrafters has the amusing effect that it can't be blocked by common deathtouching vampires.

Giant Adephage can also trample over deathtouching blockers, and creates a copy of itself, effectively surviving.

Precursor Golem is unusually punishing to non-targeted removal: a Murder will kill all of them, but a Cruel Edict only kills one. They also get really fun with the Prey Upon or Giant Growth you have in your deck.

I would also say you should replace Plummet with Stinging Shot , since it hates Vampire Nighthawk and can be cycled away if it's not needed.

Wow those cards were never on my radar. They are all really good cards. Vizkopa Guildmage is not that fast.

Valduk, Keeper of the Flame is fast. Voltron with Enchantment cards ones that care about power mostly.

Stinging Shot is in there because there are a few flying decks running around and it has cycling.

I put Darksteel Pendant in my Krosan Warchief deck and I love it, so I'll add it here.

Ulamog's Crusher is so good I should put it in every deck.

I like the first strike idea but he uses combat tricks with Vine Mare as well. Vine Mare is probably the hardest one to beat. The ways I've beaten him when he has Vine Mare was outlasting him until he was top decking.

Valduk, Keeper of the Flame I can beat with my Satyr Enchanter deck. But in the other match ups I win if I can make him get to top deck mode again.

I'm gonna add the ramp cards you suggested including some of the removal you suggested. Do you have any other suggestions?

Grubbernaut, Stinging Shot over Scattershot Archer was a meta call. There aren't any Delver decks in my group, but there is Orzhov Mimic aggro with a bunch of fliers with 2+ toughness, and a Golgari dredge/delve list that employs Sultai Scavenger.

what do you think of Stinging Shot