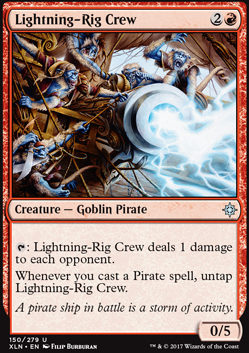 Whenever you cast a Pirate spell, untap Lightning-Rig Crew.

...And My Axe! (Axe Tax)
by doctorstrangedays

Maybe I misunderstood you, but there's a decent amount of cannons on the art of the Ixalan block: Bombard, Cancel, Elaborate Firecannon, Firecannon Blast, Lightning-Rig Crew, Makeshift Munitions & Storm the Vault Â Flip. I think what stands out more is the absence of personal firearms for pirates in favor of crossbows; see e.g. Dinosaur Hunter & Storm Fleet Swashbuckler.

You could also add Neheb, the Eternal to the deck to deal the damage during your turn and with enough power on board you could go infinite with Hellkite Charger or Aggravated Assault

I'm heavily unsure about Lightning-Rig Crew . It would be so much more pleasant if it could target creatures as well. The card does good stuff but it's very slow.

Captain Lannery Storm is a beast, she's a 3 drop that, when following up Warkite Marauder will allow for a Lightning Bolt or [[]] shock in the same turn. However, she does not synergise very well with Dowsing Dagger  Flip's plant tokens.

To solve both problems, I have tried Fiery Cannonade . It's amazing against token decks and it clears Lannery's way, but against anything else it is usually disappointing. That said, so is Lightning-Rig Crew .

@j_spencer93 There has been a multitude of situations where having a Fanatical Firebrand and not a Lightning-Rig Crew was beneficial. Thanks for the suggestions, though.

@fettywapmtg I feel like Flame of Keld isn't necessary. I actually got this idea from a player at my LGS, and he has cast Banefire for x=19 once. You're probably right about having a full set of Chainwhirlers and moving Detection Tower and Field of Ruin to the sideboard. Thanks for the suggestions.

@Dragonman39 I'm considering Rigging Runner as a sideboard card when I need to be more agressive. I think I'll take out Wily Goblin for Legion Warboss. Thanks for the suggestions.

Lightning-Rig Crew is MAAYBE a 2-of in the sideboard, but honestly you're better off disregarding that suggestion entirely (unless you go full-on pirate-goblin mode).

I also feel like Detection Tower and Field of Ruin disrupts the consistency just a bit, especially because you should absolutely I'd run a full playset of Goblin Chainwhirler (It's considered by most to be the best card in the format, and that's WITHOUT goblin synergy). Consider dropping a copy of one or both of them, and adding it to the sideboard when you adjust the curve, or need to deal with Vine Mare or messing with some multi-colored mana source decks or whatever.

The card I first recommend to you that isn't in this already in the deck, is The Flame of Keld. This card has already proven itself in the current standard format, and is particularly synergetic with Siege-Gang Commander, Fanatical Firebrand, Goblin Chainwhirler, and even Lightning-Rig Crew if you listen to these clowns in your comment section.

@elvishimpersonator I considered both of those. Rigging Runner might make it into the sideboard, and Lightning-Rig Crew seems too slow.