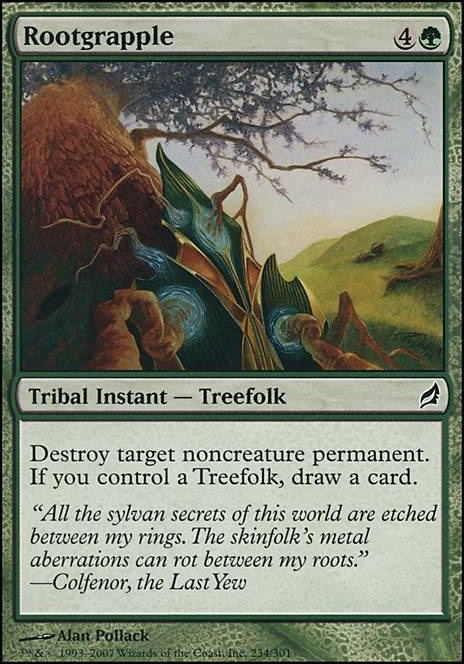 Destroy target noncreature permanent. If you control a Treefolk, draw a card.

Assuming Leaf-Crowned Elder and Rootgrapple share a creature type, yes. They should, considering they are both printed as Treefolk, but some effects can change that, such as Conspiracy which only effects creatures, not tribal cards.

@sea monkey The trinisphere, vivien and ballista serve a really specific role in making this deck tick, and they are what makes the deck expensive.

For a more budget list, I'd look at Beast Within , Rootgrapple , Dungrove Elder / Heartwood Storyteller , with Reach of Branches , so that you have creatures consistantly beefy enough to slow the ground game, then sideboard aggressively against burn/aggro with Pulse of Murasa .

Eternal witness/Primal Command /plow under is really, really strong together, so I wouldn't look at replacing that.

sylvannos on Are Treefolk viable in Modern?

One of my buddies built Mono-Green Treefolk and it's a great metagame call.

A lot of your creatures dodge the format's removal, except Path to Exile. They're too big to hit with cards like Pyroclasm. You get a lot of value from the Treefolk you do play.

Just from memory (so I'm not sure if this is the exact list), he plays something like:

also Gruesome Encore can be upgraded. Same with Rend Flesh and Deathmark. Rootgrapple and Showstopper are trash

Excellent deck, I played a lot against a friend with a Doran's deck. For flavour I would suggest Lignify, Reach of Branches, Rootgrapple and maybe Bramblecrush. :)