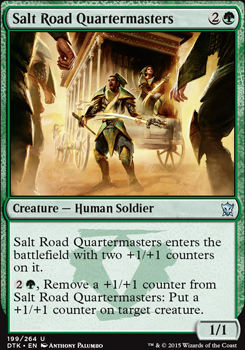 Salt Road Quartermasters enters the battlefield with two +1/+1 counters on it.

We Shall Endure
by newcomer64

Demarge you drive home a good point. I have been considering cutting blue and possibly Salt Road Quartermasters. Cards like Dromoka's Command and Gavony Township seem better and more consistent. I appreciate the help.

Here are some suggestions to make the deck more consistent and build more on it's synergy.

DRAW Inspiring Call: draws cards and protects your valuable creatures Congregation at Dawn: puts any creatures you need at the top of your library Harmonize: puts more cards into your hand Lifecrafter's Bestiary: scry and draw are great card advantage

Okay, so let's get down to business, shall we?

I'll try to guide you into creating your deck in a way that reflects what you want from it while pushing it towards the consistency and potential you'll want it to have. I'll try to keep my suggestions budget unless you let me know otherwise.

First, your deck's cards seem to be legal in modern, so I'd suggest that you keep any changes within the modern format. Another thing that I HIGHLY suggest is that you shave cards from the deck until you have 60 cards (the minimum number of cards a deck must have in the majority of formats). The reason for this is all in the statistics, as you will be more likely to draw your best cards more often the less cards you have, which is why nearly all decks religiously stick to 60 cards.

Next, we'll want to decide what we want the deck to do. Some core options to get you thinking about what you'd like to see are as follows:

Ramp: A ramp deck will want to get a lot of mana as quickly as possible and then lay down large threats that your opponent may not be ready or capable of dealing with. There are a lot of cheap creatures that tap for mana called mana dorks such as Elvish Mystic and Llanowar Elves, and there are a few creatures that help you get extra lands onto the battlefield such as Viridian Emissary and Sakura-Tribe Elder. Ramp decks also can take better advantage of fight cards like Prey Upon. A typical early game could look like this:

Counters: A +1/+1 counter deck will typically try to create a powerful, resilient early game board presence by using synergy based on +1/+1 counters. They typically run cards that generate +1/+1 counters on their own, and then later play other creatures that give benefits to or benefit from other creatures with +1/+1 counters. These decks are usually fast and aggressive, and want to race their opponent down rather than playing a long game trying to out-value them. Early game creatures might include Servant of the Scale, Young Wolf, Strangleroot Geist, and Avatar of the Resolute, Salt Road Quartermasters and Fairgrounds Trumpeter. Later, you might lay down cards that benefit from all of the counters distributed on your creatures, like Armorcraft Judge and Tuskguard Captain. These decks also have some sweet cards like Inspiring Call and and Blessings of Nature that can be simply phenomenal. Let's take some of the cards I mentioned and see how they might play out:

Infect: Infect is a deck built to deal poison damage to your opponent for an early win through cheap creatures with infect and cheap pump spells. The deck's gameplan is to lay down an early infect creature, and then swing in, and do the appropriate pump spell for the situation or if unblocked, further develop the board unless they can do major damage or deal letahl. Solid creatures for infect could be Glistener Elf, Ichorclaw Myr, Necropede, Plague Myr, Blight Mamba, and Viridian Corrupter. Some cheap pump spells could be Giant Growth, Groundswell, Titanic Growth, and Become Immense. Your typical game may look something like this:

Turn 1 - Forest, play a Glistener Elf. Turn 2 - Forest, decide how you'd like to do combat, and either use a pump spell like Titanic Growth on Glistener Elf or play a 2 drop (Ichorclaw Myr, Necropede, Plague Myr, or Blight Mamba). Turn 3 - Forest, try to get lethal with your pump spells for an early win, or lay more threats down if your others were removed.

These are some solid budget options that you could take to give your deck a bit more focus. If any of these seems right for you or if there is something in else that you have in mind for your deck, just let me know and I'd be happy to work on it with you.

RedJokr, to be honest, Drana, Liberator of Malakir hadn't crossed my mind. I do use her in another deck. I will try using her in place of the Salt Road Quartermasters.

As far as I can tell it doesn't look like you're playing much into Odric himself. Like the Abilities you'd get off of his ability are Flying, Vigilance, Reach, Trample, Indestructible. Which while that is 5 different abilities your creature will only get them right before comabat and lose them at the end of turn.

I wouldn't even run Veteran Warleader to be honest. I get why you run him but his second ability isn't going to work with this deck.

I do kind of like where this would be going with the tokens and +1/+1 counter if you focused a little more on that.

Servant of the Scale doesn't seem to bad with this deck in my eyes. Same with Salt Road Quartermasters. Since they ETB with +1/+1 counters and have the ability to transfer the counters on death or just before. Soul Swallower could get big pretty quickly if you have delirium but it's all circumstantial.

Might Beyond Reason just to add some more counters into the deck. Sunbringer's Touch might be fun to look at as well.

I'm just now getting back into standard myself. I hope that you don't take any of that too hard it's just the first things that popped in my head.

At another look, though I do not know if it is new, the first ruling on Hardened Scales on Gatherer does indeed say that. Salt Road Quartermasters and Daghatar the Adamant are made larger on entry.

boopdoop, one more thing... I totally forgot about Salt Road Quartermasters! I used to run some in this deck before I got my Den Protectors. It doesn't put +1/+1 counters on all your creatures like Nissa, Voice of Zendikar, but its still a great source of +1/+1 counters in the mid to late game. If you also have a Hardened Scales in play (which is very likely), you can remove one +1/+1 counter from Salt Road Quartermasters then put that +1/+1 counter back onto itself. That will trigger Hardened Scales giving you an additional +1/+1 counter that you can move to another creature afterward. Also, your opponent maybe not account for that interaction so you can also use it as a combat trick.

NotSquishedYet, thanks for the comments and suggestions!

With regards to Inspiring Call, its good against a control matchup and against board wipes. However, there aren't a lot of control players in my local meta so I haven't sideboarded in the card very often. The card draw was the primary reason I added it but with a three mana CMC its a little slower than I'd like. If a decent card draw spell with a lower CMC is released, I would probably swap it out.

As far as Daghatar the Adamant is concerned, I have given him a lot of consideration. The issue is that, at four mana, he is a little slow for the deck. Before I added Den Protector, I was playing Salt Road Quartermasters. It has a very similar ability to Daghatar the Adamant and its a bit easier to activate (its 2 generic and one green versus one generic and two green). Salt Road Quartermasters is a good combat trick and a reliable source of +1/+1 counters if the game goes long.