Whenever you cast a red spell, untap Chandra, Fire of Kaladesh.

Chandra, Fire of Kaladesh deals 1 damage to target player. If Chandra has dealt 3 or more damage this turn, exile her, then return her to the battlefield transformed under her owner's control. 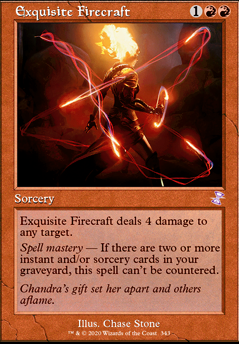 Watch The World Burn
by Subzero6977 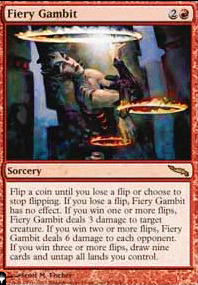 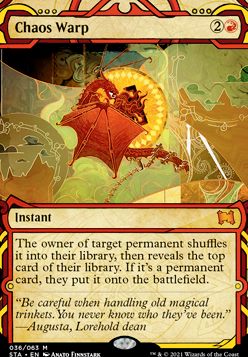 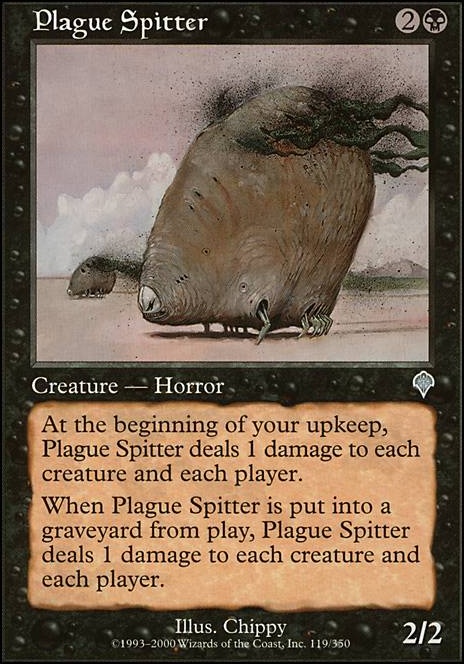 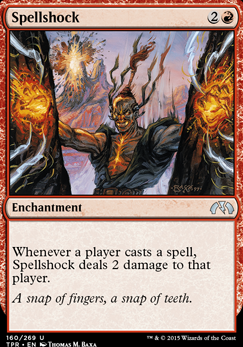 a good card would be Chandra, Fire of Kaladesh Â Flip though.

Chandra, Roaring Flame is the back side of Chandra, Fire of Kaladesh Â Flip. There are too many Chandras to keep them all straight, lol.

Assuming that you meant Chandra, Fire of Kaladesh Â Flip since that is the one that makes sense in the context of the question, yes. Her transform ability does not specify any specific type of damage so there is no requirement. If it had to be from the ability it would be formatted similarly to Ashling the Pilgrim .

To be clear on what's being discussed: Chandra, Fire of Kaladesh Â Flip

Yes, that works. Because the ability doesn't say it only counts a specific kind of damage, it counts all damage dealt so far by Chandra that turn, including combat damage.

I saw your section on why you chose mono-red specifically, but I'm curious as to how you ended up with Chandra, Fire of Kaladesh Â Flip as this deck's main general.

The original flip-walkers' condition represents some of the circumstances for their spark ignition coupled with game mechanics.

For instance Chandra, Fire of Kaladesh Â Flip flips by dealing damage. In her lore, as a child she attempts to hide her pyromancy as it is seen as forbidden and outlawed. In an attempt to run away, she accidentally blasts some of the village huts which sets on fire, and Chandra flees. The law enforcement believes some of the villagers are responsible and sentences them to death by locking them inside the burning huts. When Chandra sees that her family is among the accused, she surrenders. The law enforcement don't believe that she is solely responsible and continues to burn the villagers, and proceed to execute Chandra by sword. At this point Chandra's spark ignites in response to Chandra's distress and she is planeswalked to another plane.

The capture on the game piece is her dealing damage, making herself become known, starting the events leading up to her capture, attempted execution, and spark ignition.

If you take a character like Sorin, he wasn't always a Vampire. The plane he was from had famine and sought in desperation alternative ways to sustain themselves. This led Edgar Markov to seeking blood gifts from a Demon, eventually transforming himself and later Sorin into vampires. Sorin's transformation was gruesome and the trauma ignited his Spark.

If you aim to make flip walkers, I would suggest to tell this story, in however way you interpret those events by game mechanics. Seeing as it was done in desperation, perhaps the trigger should not be bound to life gain, but something else? Perhaps Sorin by himself is a strong creature that keeps draining you of life, and when you're at a threshold, he transforms - becoming a vampire planeswalker and can aid in gaining you life back. That's one way to interpret it from a game mechanic standpoint.

I know it's unlikely to matter in context of the game, as things have to be balanced, but Sorin is what is known as an "Old Walker" - a planeswalker from before the Mending. These planeswalkers were essentially gods with unfathomable powers and immortality - Serra (another Old Walker) created an entire plane of existence for herself and those who sought to worship her benevolent being, and she created angels out of nothing. These planeswalkers were vastly reduced in power with the Great Mending. An event that sought to heal the world from the scars left by Old Walkers recklessly using their powers. However even reduced by the Mending these Old Walkers are still leagues stronger than the new generation of planeswalkers - like Chandra and Gideon. Nicol Bolas, Planeswalker was also an Old Walker - which is partially why he was able to take on so many opposing planeswalkers during the War of the Spark.