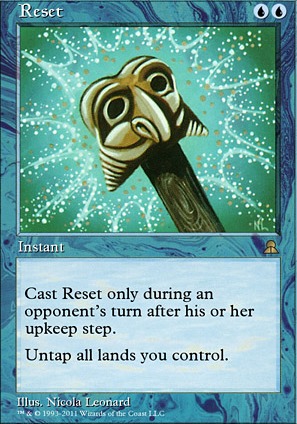 Cast Reset only during an opponent's turn after his or her upkeep step.

Untap all lands you control. 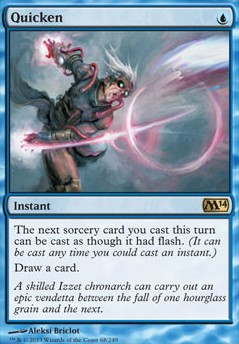 sTAPx (sit down now)
by Epicurus I mean, if you want to be "Mr. Lightning Bolts" in Izzet, you've gotta have the Lightning Bolt , Reset , Reiterate , Firemind's Foresight combo.

Driemer84, Starfield of Nyx is probably going to be on the chopping block for my next rendition. Upon play testing, I need to protect my Jace or Lab-man when I want to go off. So far Iâve run into problems with correctly allocating colored mana with Leyline of Anticipation out, but that can be corrected. Iâve also run into not being able to protect myself from decking out without a win-con. For that I am considering Platinum Angel or something similar along with a couple more counterspells. Reset and Rude Awakening seem like fun answers to me.

The Storm of Mizzix's Immaculate Experiment

Reality Spasm is another Turnabout (or Reset ) very important to Mizzix of the Izmagnus .

Fellow Mizzix of the Izmagnus player, Mizzix, the Storm. I haven't updated him recently, been working on my Kaalia of the Vast deck.

Both your recommendations to Bigant1 are good though, adding them to my maybeboard as well for evaluation and possible inclusion.

@bwhit89: Even if Ral, Storm Conduit was like $0.05 or if you're playing on a higher budget, it's just not good. This deck has no creatures that can protect Ral if you use him for "value." At 4 mana (a cost that cannot be reduced), the effect is not worth it as a one-shot effect. Dealing damage randomly without actually killing the opponent in one turn isn't what this deck is trying to do, so the static ability is only good as a combo, except that's a 3 card combo, which isn't great (2 or 1 card combos are better). And we already have a "copy spell" combo in Reiterate . So, tldr, no to Ral.

@zdennis: Arcane Denial is a fine card and you could play it over Mana Leak. I don't want to contribute to the endless "is Arcane Denial a good card" debate, but play it if you want. It's fine and budget.

Reset is... not a budget card.

Fury Storm looks interesting. I'd lean to the no side, for a couple reasons. First, the RR cost is pretty rough for the deck-- I know I have a few effects that are RR, but we really want to limit that. Second, it's not as good when your hand is clunky, i.e. it by itself doesn't turn an otherwise medium hand into gas. It turns a card in your hand that's gas into yet more gas. We're trying to limit effects like that. Fury Storm is one of the better versions of a card like that, so I'd probably put it in the "maybe" category.

Why not run Dramatic Reversal instead of Reset ? It works the same way ( untapping lands vs untapping rocks or dorks is the same thing ) and is less restrictive. You could finish the game on your turn with the guildmage combo instead of needing to pass turn.

Shimmer/ Paradox Engine allows for mass, instant speed storm, at an insane ease. Yisan, while being better with Engine (untapping Yisan allows for fetching Llanowar Elves into Priest of Titania into Shimmer Myr into Temur Sabertooth or whatever, then keep untapping Yisan to go off until Great Oak Guardian then Sabertooth into infinite mana) still isn't an instant-speed spell, that is the issue. If the gamplan can be Swords to Plowshares ed at sorcery speed, the deck is doing something wrong.

If, just by playing lands, maybe a dork or some rocks, and passing, drawing cards, biding your time until the winning combo or impossibly difficult to win through lock hits the table, respond by casting everything you need to until you win.

This playstyle is Legacy Resetide ( Reset / High Tide with untap effects and a deck made up of Islands and instants, ready to storm until it casts a lethal Stroke of Genius on the opponent). I simply wanted to see if it was possible to accomplish a similar playstyle in Yeva.

You can't build Resetide in EDH because there isn't the consistency of running 7 Resets and 7 Tides (Legacy uses Cunning Wish as a playset for the 7 copies of every card in the deck it needs), nor can it even run enough instant speed draw and untap and ramp to pull it off without them, so mono-blue is out.

Zur can storm off at instant speed using Necropotence and Shimmer Myr , however doesn't have the luxury of doing it at anytime but on their own endstep, making it not a true-instant speed storm, as it can't do it in repsonse to an opponent winning on the opponent's turn.

Yeva, this list, can do it, only given a good hand and a lot of mana, but it can, with GoG and Cat. That was my interest in the deck. The issue was getting Cat, dorks that tapped for enough, and GoG, the mana to go off, and the interaction/protection to pull it all off.

Yeva was a long-shot, but if any deck could do it, Yeva seems like the one. The issue I found immediatly was wincon-lightness and tutor-lightness. The Cloudstone Curio , Paradox Engine wincons of the deck only go off at sorcery speed, so have big issues, however Shimmer Myr solves that, and allows for Walking Ballista , Candelabra of Tawnos (for Gaea's Cradle ), and more rocks to go off. The issue again is tutoring for that, then for the new combos. If this list had the tutor-density that a 3 color list like Zur would, it would work amazingly. As is, it just doesn't get there.

I am going to work further on this and try to get it to work, but Soren841 may be right that this is too difficult to accomplish.

Resetide may have friends in Teferi, Mage of Zhalfir . I may put some time into testing him out. That 5 mana cost is my biggest issue.