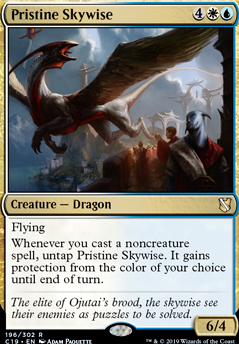 Whenever you cast a noncreature spell, untap Pristine Skywise. It gains protection from the colour of your choice until end of turn. 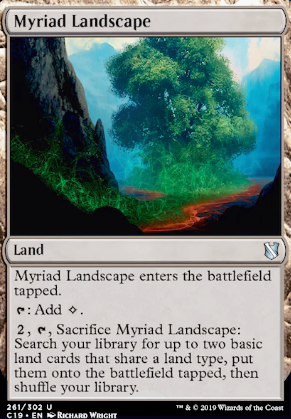 Elsha the Infinite
by ComicstheGathering 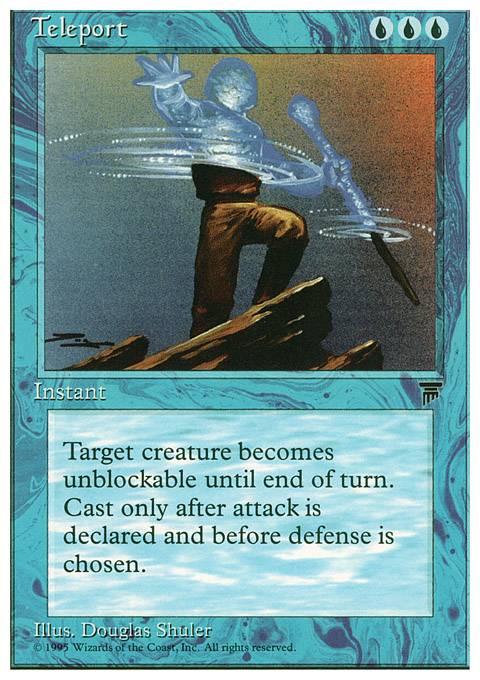 I agree, those planes were so lame. âGuys, get excited, this is Mongolia with Dragons!â and âOkay guys, this is so epic, this entire plane is New Delhi with robots!!â just did zero things for me. I do want to discuss Tarkir for a bit though, because it highlights some of the laziness of WotCâs design. I wonât discuss Kaladesh because it was a snooze fest from start to finish. Super boring mechanics-wise and worldbuilding-wise.

Tarkir was a little less irksome than Kaladesh because the mechanics of the set were a bit more interesting to me and the cards seemed better-balanced apart from Siege Rhino in Standard. I think it was also helped a bit by having diverse environments and factions â the wedge color pie âclansâ at least had somewhat well-defined characteristics and even featured watermarks on their cards reminiscent of the Ravnica guilds (I still felt like Mardu was not representative of its colors though; I was surprised when they made Dega (what used to be nicknamed) the âtotal chaos / aggro / Orcs ânâ stuffâ clan â would not have been the choice I made...I mean when you take the Lawful Evil Orzhov, and add , does it just suddenly become a World of Warcraft Orc-party ripoff meme?). Each clan had a theme, a mechanic, and then the third set of block gave us five new factions that were allied color pairs, with a slight twist on the mechanics that their previous tri-colored incarnations used to have. The issue here, of course, was that these new allied color factions often just felt like ripoffs of the Ravnica guilds they mirrored, and didnât feel new enough:

Finally, there were the clan-unifying mechanics of morph, a reprinted mechanic that was still done fairly well and felt interesting in Limited, and then its âtwistâ in the final set, âmegamorph.â This was the most boring design cop-out Iâd seen yet. âGuys, get excited. This is EXACTLY like morph, but it gets a +1/+1 counter when it goes face-up!!â My God. So. Lame.

Anyway, I think the wedge clans color shifting into allied color pairs really highlighted a big lack of creativity on the part of WotC. And I think they got some of the design behind the wedge clans wrong. Plus âthe entire planet is Mongoliaâ thing was a bit silly.

Kaladesh was just lame and sucked. Didnât help that the quality of the cardboard hit rock bottom in this era, but we arenât here to discuss that.

Your lands are a bit funky... You really only need around 36 lands for something like this, and you have plains as the majority of basics when white is the smallest portion of your deck. I would switch up basics so you have 10 Island s, 4 Plains , and 6 Mountain s. Aside from that to bring it to 100 cards I'd cut stuff like Storm Herd , Clone Legion and Sublime Exhalation . They're good cards but really not worth the mana cost. Some things that didn't seem like they really fit with the theme of the deck are Azor, the Lawbringer , and Pristine Skywise . I could be reading the deck completely wrong but this is just my two cents, take it with a grain of salt as I'm still relatively new to building decks. Sorry for the wall of text as well.

Since Shu Yun benefits from a lot of noncreature spells, some counter spells and exile effects would be useful. Enchantment and artifact removal like Forsake the Wordly and Solemn Judgment would be useful. Norn's Annex, Propaganda, and Ghostly Prison can make it harder for opponent's to swing at you. Counter spells like Swan Song, Essence Scatter, Rebuff the Wicked, Mana Tithe, and Countermand provide protection and the necessary control aspect you might be looking for. Other creatures with Prowess and similar effects would benefit from what you have in mind. Monastery Swiftspear, Pristine Skywise, Cunning Breezedancer, and Pyre Hound to name a few. The Ravnica bounce lands you will want to add would be Azorius Chancery, Izzet Boilerworks, Boros Garrison, and the tricolor land Mystic Monastery. You can also add the other dual lands, Tranquil Cove, Wind-Scarred Crag, Prairie Stream, Irrigated Farmland, Inspiring Vantage, and Spirebluff Canal. Some must have artifacts are Elixir of Immortality, Venser's Journal, Chromatic Lantern, Jeskai Banner, and Argentum Armor. Hope this helps!

I dont fink you have enough instinies for deh Pristine Skywise flap flap, but consideer it. Alshow, I fink dat Judge's Familiar is a gud flap flap for deh counties. Another counties flaper is Spell Queller and despite areythang, its counties are usually unmatched. Lyev Skyknight is gud for all deh flap flap haters who can get a time out in der prisons and yer dont has to pay alot for im either. For ULTIMATE flapitude, consid-er deh Archetype of Imagination because you know wat deh say, "live by the flap flap but dont die by the flap flap because we love them too much for dat".

Definitely use the dual lands and the fetch lands. They work together rather well, and fix up your mana base nicely.

Also, you have 2 copies of Pristine Skywise in your deck right now... might want to take one out. You could replace it with Mycosynth Lattice as it works very well with the Hellkite Tyrant you already have in the deck.

You probably want to hit edit and change deck type to commander so it doesn't say your deck is illegal. While I am at it, I will pelt you with some of my personal favorite U/W cards I know of. Like Daxos of Meletis. Since your using blue and white together, you have to make use of the blue and white cards as they are generally better than mono-colored cards.

Let me see here. Air Elemental is outdated, try Pristine Skywise instead. Its WAY better for one more mana, and you can be invincible when you cast!

Cobalt Golem is kinda gross, I like Ascended Lawmage its ten times better! (because he can already fly and cant get hit with abilities)

Glacial Crasher is ok. If you have him for trample I understand. If not Shipbreaker Kraken hands down. (Because he can be stronger for the same cost and tap out cards)

Glacial Wall is ok. But one of the all time best white and blue cards is Wall of Denial so scrap it for that. (Because its 1 tougher and enemies cant hit it with abilities)

Tandem Lookout? Swap for a Curiosity

I love Sphere of Safety but your deck needs to be well near 80% enchantments for it to be worth it. Dissipation Field is more up your ally. People wont attack you when they know there creatures get sent right back.

Other than that, your well on your way! With the number of flying creatures you have, its worth noting that Stormtide Leviathan can mean you win the game. So if you add anything, this and Wall of Denial are your two best bets.

If you have any questions, white and blue are my favorite colors so hit me up!

I have to say, I really enjoy Pristine Skywise and Judge's Familiar when I go birds.