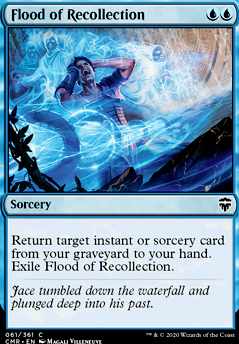 Return target instant or sorcery card from your graveyard to your hand. Exile Flood of Recollection.

Flood of Recollection occurrence in decks from the last year

It's Freaking Draw, You Donkey!
by gameguy957

Rogue One
by Merjan1 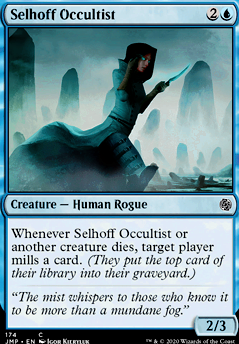 Nice, I like the bit more counter/control heavy route you've taken here. Have you considered Cunning Nightbonder as a sideboard option for control or to potentially conserve mana to pump Wildborn Preserver? Also Mission Briefing might be a better alternative to Flood of Recollection since it is at instant speed. Hope this helps.

Please Sir May I have some Mil

Manic Scribe and Mission Briefing look like good cards for this deck. Mission Briefing over Flood of Recollection , I think. Ashiok, Nightmare Weaver also looks like a solid addition to the deck, but that would also require adding some black mana. However, 4x Drowned Catacomb and 4x Watery Grave should be enough. Mystic Sanctuary also looks like a nice addition, maybe 2x or 3x.

Just some thoughts-- hope these help!

interesting on Marionette master, i actually wanted to splash black because of underhanded design, as soon as any of your group draw cards provide 40+ treasures (which is really easy) everyone dies. and zur can easily tutor for it.

imo, revel in riches and expropriate are kinda the weak links in the deck, more often than not i don't think an extra turn from expropriate will be required (helpful, but not required) and revel is too slow, a miss timed vandalblast, bane of progress, merciless eviction, cyc rift, or cleansing nova can stop it.

that said, i have hundreds of games played with my smothering tithe games at a few LGSs and couple things i've found, the wheels tend to be worse than good (except for windfall) so echos of eon, whispering madness, jace's archivist, etc. it's the easiest way to whiff on your combo chain, if you don't draw the next group draw in those 7 cards you end up stuck, so i ended up gutting all of my wheels out of the deck except for windfall. on the other hand, spell recursion cards end up as another combo enabler, since you needed one to start off anyways, you'll have one in the grave to recast, so Mission Briefing and Flood of Recollection or Archeomancer becomes a "second copy" of a group draw spell instead to keep your combo going. but because i went that route, i had to cut Rest in Peace, but since you sorta have access to leyline of the void, it might be worth the trade out.

i've made a pretty big deck list change recently, i don't know if you saw. so you may want to check out the new list to see if anything catches your eye.

as far as building it on paper? the deck is strong, but it can also be hit or miss, and it's definitely weak to aggro, so it might not be too strong for your play group than you think. i know i lose my fair share of games if i never get a draw spell or tutor to hand.

if you want a funny/sneaky tech for winning with treasures though. March of the Machines + Pitiless Plunderer + Zulaport Cutthroat and friends will instantly win the game if no one has an interaction.