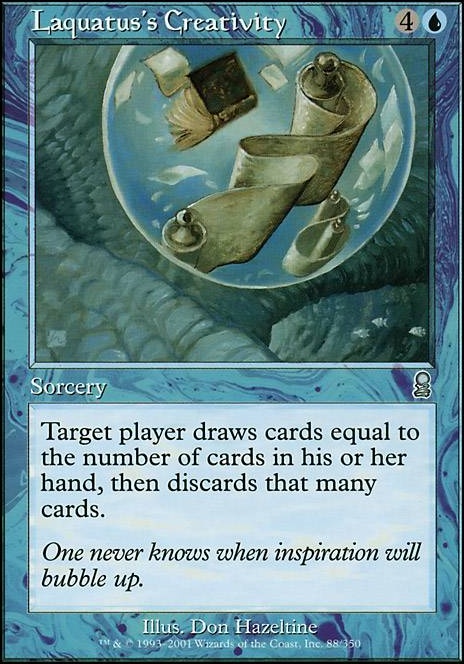 Target player draws cards equal to the number of cards in his or her hand, then discards that many cards.

Shenanigans and lightning
by Violet_Hatter

The Low-cost God
by Kolchao

Woooooooo, Those Wheels Burn So Good

I'd recommend cutting some of the creatures if the plan is to go Voltron.

Some suggestions as follows:

Since Bruna cost 6 CMC to cast, we want to be able to cast her as early as possible and if able, have some backup protection (e.g. Counterspells) so that she survives to the next turn to swing in for massive Commander damage.

Azorius means we can only rely on Artifacts to ramp. I'd recommend some of the following, depending on your budget:

I'd run at least 10 mana rocks, or more if your deck permits, to ensure we can drop Bruna out asap.

Enlightened Tutor is a must in this deck since it fetches your a much needed ramp or a game winning enchantment for just . A more expensive tutor is Idyllic Tutor that fetches only enchantments.

There's also an entire suite of "Transmute" cards in blue that you have access to, depending on which are the key cards you need and if there's a matching CMC transmute card.

I'd recommend playing more "wheel effects" and aggressively draw and dump auras into your hand/graveyard early game, setting up the stage for Bruna to put them on once she comes online.

Cyclonic Rift is the blue staple.

But sometimes, offense is the best defense. I'd come back with more suggestions as and when I can dream them up!

I love this deck. It reminds me of the early days of my Nekusar deck (which initially was going to have Lord of Tresserhorn as the commander before Nekusar, the Mindrazer showed up later that year). I am assuming you're on a more budgeted approach as some of the key Nekusar wheels that are more expensive are missing.

As for recommendations, I'll start by saying it might be easier to avoid cards like Psychic Spiral. While overall not a terrible effect, it's only useful if you play 1v1 or just need to finish someone off (which can be done with a massive similar effect). Here are some cuts I would make as well as what might be good replacements at similar or better mana costs:

As for some other good-stuff cards you might want to look at: Magus of the Jar, Magus of the Wheel, Helm of Awakening, & Fellwar Stone are all possibile additions if you don't like some of the other suggestions.

Honestly, I am glad I found this deck because of a card YOU have in here that I need in mine. Kiora's Dismissal is great enchantment hate my deck needs as I regularly face against a G/W token deck with an enchantment sub-theme. Anyway, +1 from me on the deck!

Cyclonic Rift is a great card and would be a great addition, I just have one copy and it is currently in another deck so I have to settle for the sorcery speed red board wipes for now. In the games so far I have found that due to The Locust God's innate recursive ability, that even when he gets killed I just play him the next turn.

I have had other creatures in this deck before, and have always ended up taking them out feeling like they never had a being enough impact on the game. Due to the number of board wipes in the deck I also didn't like blowing up my own creatures. One guy that I'm still on the edge about adding is Neheb, the Eternal due to having multiple combat steps and acquiring insane amounts of mana. I also had Pull from Tomorrow, and other X draw spells too but I prefer the card draw cards that I don't have to dump my whole mana pool into. Though those would be really good with Neheb, the Eternal in the deck.

Personally some of the out performers in the deck have been Laquatus's Creativity and Shared Discovery. Tapping down 4 creatures to draw 3 cards for one mana is just so powerful and the Laquatus's Creativity allows you a huge amount of card selection making your had very potent. The way that this deck is currently built is so that it goes off in one turn drawing copious number of cards and ending with able to clear the board, or killing at least 2 players. One of the combos that allows this is having Bident of Thassa out and playing Breath of Fury, this nets you enough combat steps to win the game.

Vision Skeins is better than Words of Wisdom

Vedalken Orrery and Leyline of Anticipation are better than Hypersonic Dragon

Wheel and Deal is better than Laquatus's Creativity

You should definitely find a spot for Liliana's Caress and possibly Raiders' Wake if you can, discard pain goes a long way in Nekusar.

Hey thanks for the feedback!

I initially had Deep Analysis and Sever the Bloodline in my first draft of this list but ended up cutting them for other cards. I still really want to include Sever the Bloodline as it is pretty decent removal and the flashback option is great, but I'm not sure what I would cut at the moment. I don't know how I missed Cackling Counterpart when building this, I'll have to figure out what I'm dropping but I definitely want to add him in so thanks for that suggestion.

I'm not too keen on Greenwarden of Murasa due to his CMC and the fact that he's $1.00 at the moment. I would definitely include him if it brought them to the battlefield instead of my hand, is there anything like him that does that I'm not already running?

Bitter Revelation and Mental Note seem a bit underwhelming to me, I feel like it's kinda like a less impactful Tracker's Instincts/Commune with the Gods/Forbidden Alchemy/Grisly Salvage but having a few more similar options might be good. I'll have to play the deck a few times and get a feel before I decide on that.

I 100% agree on Chronic Flooding, I like that it's more controlled and you don't have to worry about it decking you too much, gonna swap those out for each other.

I kinda feel the same about Corpse Churn as I did with Mental Note ect above, still I'll have to test the deck a few times to see if it needs more recurring options of that kind.

Embalmer's Tools was another card I had in the first draft of this list that I ended up cutting, it's another card I definitely want to include but am not sure what to cut, probably going to end up dropping Blossoming Wreath as you suggested earlier as I agree that it's not that impactful/worth taking up a slot so I might put it in to replace that.

Fact or Fiction and Epiphany at the Drownyard are both great cards, just need to make room for them, probably going to drop Feldon's Cane since I wont be as worried about decking myself without Curse of the Bloody Tome to make room for one of these.

Extractor Demon is already in the list haha, but yeah very good.

I'm liking Gather the Pack probably going to drop something like Wreath of Geists because I feel like there's already enough options for +x/+x per creature in graveyard in the deck already but we'll see.

Thanks again for the feedback.

Laquatus's Creativity, Whispering Madness and could be nice to get the mill going

Cackling Counterpart, Deep Analysis and Sever the Bloodline could be good because of flashback

Greenwarden of Murasa could be good, maybe over crop sigil

Mental Note could be clever

Chronic Flooding seems better than the curse of the bloody tome

The new explore creatures form Ixalan could be good as well

Possibily cut feldon's cane, with elixir of immortality you have alot of inevibility

maybe blossoming wreath as well, gnaw to the bone does more work and having spells just gain you life aren't worth it a lot of the times IMO

I haven't had good expirences with temple of the false good, maybe cut for Rogue's Passage for a go tall creature?

This is a really sweet deck! Very budget and looks like it plays out in fun and unique ways each game. I really like tinkering with budget decks, as you can probably guess, and I am currently working of a couple of my own. If you have the chance maybe check them out? Un-FLICKING-believable!!!!!!!!!! is my newest. Thanks and keep building budget brews!

A Literal Ton of Locusts

Any mass draw + Molten Psyche can be a funny way of finishing someone off...

You might also want to play more protection for The Locust God. Lightning Greaves, Alexi's Cloak.

Bumping CommanderEesha's Skullclamp suggestion. It would be absolutely broken in this deck !