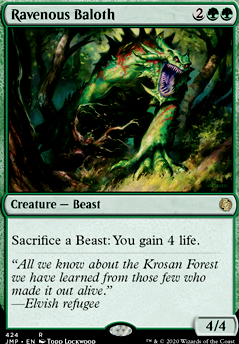 Sacrifice a Beast: You gain 4 life.

The G and his Beast Friends
by TheGreenWizard 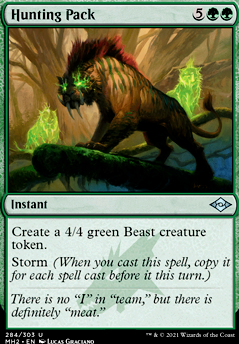 You don't want to be sacrificing your beasts, the only win condition in your deck is attacking a lot with a lot of beasts. So I would either remove Ravenous Baloth or add Blossoming Bogbeast . Those 2 together are a wicked combo.

Yes! WotC is finally reprinting Rhystic Study! It took them years to do so, but better late than never. Hopefully, this reprint shall lower its cost to a point where it is actually affordable to the majority of players.

Another reprint of Phyrexian Tower is always great, as well. I did not realize that Craterhoof Behemoth has become so expensive, so another reprint of it is very welcome. It is also very nice to see Exquisite Blood reprinted, but I now am worried that WotC may not print a creature version of it for many more sets, yet.

Among the new cards, allosaurus rider will be great for elf decks, but is the first time that elves and dinosaurs have been mentioned on the same card, so I wonder what connection they have to each other?

I wish that both Ravenous Baloth and Thragtusk had been downgraded to uncommons for this set, since, as sad as it may be, power creep has caused them to now be unimpressive for rares.

Vivien's Arkbow and Lifecrafter's Bestiary can give some additional needed search/card selection to keep the flow of creatures coming.

Voracious Hydra can be some creature removal on a stick. And you may have enough hydras to make it worth running Gargos, Vicious Watcher. The CMC discount combined with your commander's should make some pretty big hydras. YMMV though.

Not sure how fast Aetherflux Reservoir will play in this deck. Its usually better in a deck that casts a lot of cheap instants all in the same turn to go off. If you're just looking for more lifegain, Thragtusk may be an option or maybe Ravenous Baloth [the Garruks produce enough 3/3's to feed this].

If you're looking to keep a 1/1 deathtouch in the deck, Gnarlwood Dryad is an upgrade to the snake as it at least has the potential to grow on its own.

Land count seems a bit low here as well. I'd up the count some or at least get a couple more of the cheaper ramp spells in there, Nature's Lore or if you have some snow forests Into the North plus maybe add Wayfarer's Bauble

I also think you will want an Overrun type effect in here as a finisher. Return of the Wildspeaker could get subbed in for Hunter's Prowess or some such. Sadly it lacks trample but has the flexibility to buff or draw cards.

You're not allowed to use Krosan Warchief , Ravenous Baloth , or Wirewood Savage .

LittleBlueHero on Speculation on new dinosaurs with â¦

I think a reclamation sage or even a Manic Vandal type dino would be very on flavor.

We already have Deathgorge Scavenger doing great things against graveyards so I don't know that wed see the angel ability. But thanks to that card its on flavor for sure.

Flavorwise I don't think Mindclaw fits at all. Love the card but it just can't see a dinosaur involved in spell casting.

In my head Dinosaurs are beasts. They aren't magic really in any way so most of the things they can and will do will be built around combat and buffs etc. I would love to see them go after the minor lifegain theme they have going bringing in something like Ravenous Baloth type effect. They also need a strong way to close out games. Gishath is great but I still think an etb Overrun esque effect would be awesome to have on a dino like Pathbreaker Ibex. Really just more faux Lords that grant abilities and such like Bellowing Tanglewurm.

My favorite green card has always been Eternal Witness and while i don't think it makes a ton of sense I would love that type of effect on a dino, even if it cost more for a bigger body like Greenwarden of Murasa.

Also a large flier that can hold its own against the usual suspects in commander like Steel Hellkite would be a great addition.

So, to start with, there is a lot of beast synergy.

Ravenous Baloth is a great way to blank removal and gain life from it, as well as being just efficient.

Beyond that, I don't know what your casual meta is like. Fog/Naturalise are still bad in the main deck. That is what your sideboard is for.