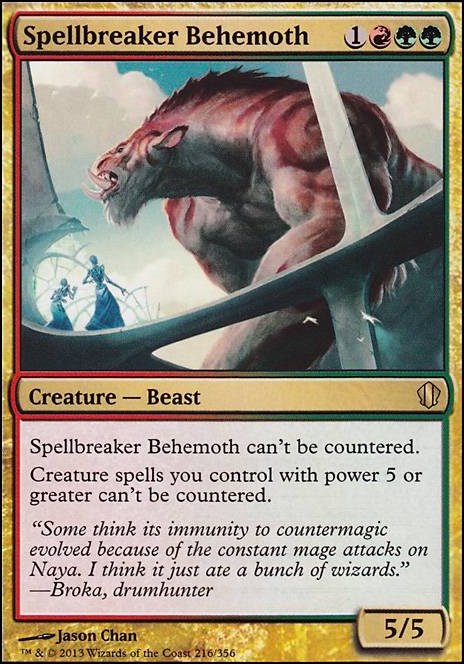 Creature spells you control with power 5 or greater can't be countered.

Spellbreaker Behemoth occurrence in decks from the last year

The Good Old Days
by Zephyr530

+1 I read the primer, while I knew a lot of the stuff you mentioned as a Xenagos player myself, it was refreshing! I noticed you put dense folliage and plated slagwurm out of the deck, is there any particular reason? I found the reasons in the primer convincing.

As you mentioned in your primer, the worst thing that can happen in a Xenagos deck is having a blowout, getting your creature killed in response to a draw spell. Unfortunately, my meta is FILLED with interaction and spot removal, which is Xenagos's achille's heel. City of Solitude is an allstar in my list, stops blue as well. How would a Xenagos deck deal with a meta that's filled with interaction and spot removal? That's my biggest question for you. I personally don't run extra combat steps for this reason because they only help when I have a creature which sadly isn't that often despite having 31 creatures in the deck BECAUSE I become such a target. For whatever reason, people are afraid of Xenagos :D Another weakness is control decks which are just a bad time for us. While I don't run it in my list, have you considered Prowling Serpopard or even Spellbreaker Behemoth as tutorable ways to deal with blue?

Want to rack your brain regarding recursion as well. Mimic Vat is a very interesting card I never considered by will do so seriously thanks to your primer. I feel like it's exactly what I need to deal with ALL the spot removal in my meta. I added Reap the Past as well as E=wit and greenwardern. The warden might be overkill, but he works nicely with Berserk effects, that way I don't mind if they use spot removal on him.

I'm astonished you are running Thran Dynamo over Skyshroud Claim . Both can be used the same turn, but dynamo gets shut off by your own collector off and opposing null rod effects, not to mention it can get blown up. Skyshroud can color fix you as well, but thats rarely and issue for G/R players.

In your primer you mention Joraga tree speaker is like a green sol ring, but he doesn't actually "ramp" you. Play him T1, Level up T2, you have 2 green mana, no more than you would have had without him. I don't like him outside of elf-centric lists.

Voracious Hydra - Acts as a beater with trample and built in removal, or he can just get HUGE.

Decimate - 4 cards blown up for 1, huge value and can be played prior to Xenagos to clear the field. Note: You do need 4 targets, but you can always target Xenagos for the enchantment should none be on the field.

I noticed you run Return of the Wildspeaker . I think I might replace my Garruk, Primal Hunter with that. Thank you for that, I like how it's instant speed so you can use it in response to removal instead of having to pay ! Speaking of draw, have you considered The Great Henge ? Can cost just , buffs your dudes, gains you life and most importantly draw you cards. It might be better in a deck with more creatures, but I thought it worth noting nevertheless.

What are your thoughts on Shapers' Sanctuary ? Since the deck folds to spot removal, this comes down early and draws you cards. I'm going to add it to my list.

Embercleave seems weak, even with Godo tutoring it onto himself, and Xenagos + equipment buff, it becomes 8/8 trample doublestrike, so 16 damage at most for 6 mana seems weak. This doesn't take into consideration that you might draw into the equipment prior to drawing into Godo, which would suck because you would need to pay a higher cost since the deck doesn't go wide as you noted in your primer. Maybe consider Mage Slayer as well or even as a replacement? That way you're not as reliant upon Godo.

Under your section of cards you don't play, I disagree the following....

Overall, I'm very impressed by this list. This seems like a beast to play against. I made my Xenagos deck's CMC higher rather than lower to the ground because that would just exacerbate how threatening I am to the table and I choose to sacrifice speed for late game resiliency. Whenever you get a chance, I would appreciate it if you could take a look at my Xenagos list Bro, or should I say, Xenabro

Xenagos of the Wild Party

Thanks for the comment VaultSkirge. Spellbreaker Behemoth is a card I considered until I thought about how Genesis Wave works. My understanding is that creatures that ETB as a result of genesis wave are not "cast", so they can't be countered. Given that typically 80% of my creatures come from a gensis wave cast, Spellbreaker Behemoth 's effect is wasted.

Xenagos of the Wild Party

You should play Spellbreaker Behemoth