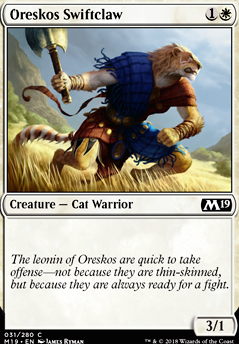 Kitties and Doggos
by AR25V 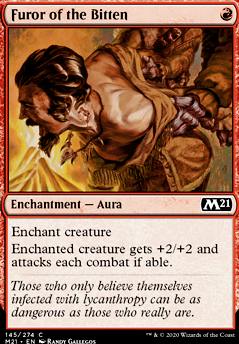 TriusMalarky on What advice would you give â¦

TBH, I play with a lot of people who really don't know what they're doing. I can easily be in the top half of my LGS with a $15 deck when I'm not brewing something stupid.

WOW! I didn't know that the rules for companions were just sitting there invulnerable giving their abilities throughout the game without being killed or sent to the graveyard or exiled! Very nice!

What else would you recommend for a 'ready for anything' deck in Selesnya? Am I missing any instants, sorceries, or enchantments, or artifacts?

To be prepared, I have 1x Watchers of the Dead, 1x Prowling Serpopard, 4x Angelic Gift, and 1x Sundering Growth for, respectively, graveyard heavy, counter heavy, and flying decks and direct damage, and enchantments and artifacts. I would love to be able to draw these cards when I need them... something like a green/white Grim Tutor! They should have released tutors for every color since that gives black a HUGE advantage! Is there any drawing power better than Huatli, Radiant Champion, since even she depends on creatures entering the battlefield for card draw. If I had a ton of 1 drops and 2 drops, I would agree to it, but most of my deck isn't that cheap in mana cost.

Do you think I need mana ramp? Initiate's Companion is overall a great card, it's like an Oreskos Swiftclaw or Prowling Caracalbut with an added ability and same mana cost.

You need more mountains to get the most out of Wild Nacatl, having just 1 means you'll rarely ever see it in game, and using Evolving Wilds to grab it seems really wasteful. I would cut the Nacatls and the Mountains for more consistent mana. You have way too many lands in general, in a 60 card deck you really don't need more than 24 unless you're playing that really requires a lot of lands, like a ramp deck. Savannah Lions is worth being a 4 of, it's a really strong creature for one mana. Jazal Goldmane is a good 1 off to pump the entire team into a big push. Jungle Lion is Savannah Lions but in green, which is good for the aggressive game plan you're using. I'm not really a fan of Jareth or Phantom Nishoba since you'll likely either win or be close to it by the time you get to 6-7 mana, they can be cut for cards of lower mana costs that help you attack with more cheap cards, like Oreskos Swiftclaw This is a pretty solid list for a first couple attempts, better than any of my early lists.

This is a cool and interesting tempo deck. I am unsure that you will run into enough artifact and enchantments to have to maindeck Naturalize and Safewright Quest seems a little slow with 4 Commune with the Gods already maindecked.

I think the major opportunity is that this is a deck that looks to win with creatures attacking, and only has 13 to attack with. This might be a fun deck to try things like: Hopeful EidolonYoung WolfOreskos Swiftclaw

id recommend build all decks to 60 cards, also id say try not to run so many 1 ofs, if this was made from cards you had lying around its fine but if your trying to give it maximum potential and consistency run 4x if you can. when cutting cards get rid of the cards that dont help the strat of the deck. id be looking at Oreskos Swiftclaw and Dromoka Warrior. they are worriors and 3/1 for 2 is on par but if you could get you hands on another 3x Brutal Hordechief that would make the deck stronger and more consistant

this is a deck i made using random cards i have (casual play with mates) Zulaport Cutthroat is the main thing of the deck and i only have 2 so to shell this problem i put it in a agro deck with lots of low drop creatures and draw power, the only card that doesnt follow the nature of the deck is Glorybringer the reason he is in there is as a secondary win condition if playing small things and going wide isnt working. with your Oreskos Swiftclaw and Dromoka Warrior i feel they are more of just a space filler that could be better used card slots.

and im assuming that you are using the best removal cards that you could get your hands on because Reave Soul is actually a bad card i can see it with some use if you had a card that reduced power like Meishin, the Mind Cage but you have nothing of the likes.

one last thing is that you might want to consider adding some form of "draw power" pretty much any card that reads "draw a card" is good for you deck or "draw 2" or "whenever x happens draw a card" is best.

hope my rambling didnt bore you, if you have any questions feel free at ask :)