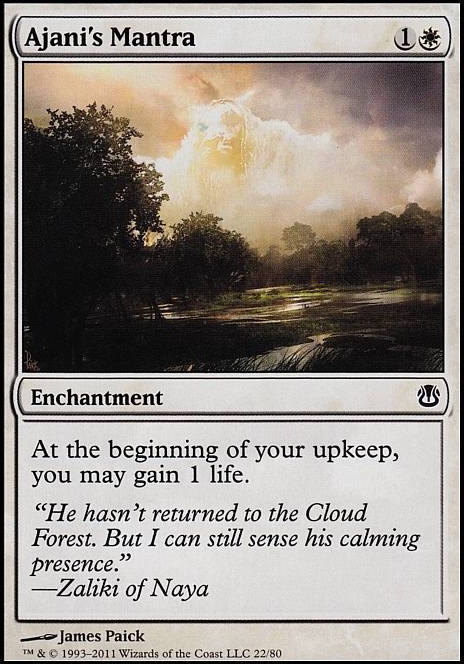 At the beginning of your upkeep, you may gain 1 life.

Karlov the Tax Collector
by Hydrax

White Knighting At it's Finest
by LeksTheLegend

Ben ran across Putrid Warrior and thought it might be able to help in here since you could choose whichever mode you needed at the time. If you were thinking of trying 2x of them for instance and it were my call, I'd cut Ajani's Mantra and 1x Soulmender. Food for thought anyway.

Maybe Spirit Link,Staff of the Sun Magus, and Ajani's Mantra might help to bring the curve down.

I think this deck is awesome. Cool too see Ajani's Mantra find a home somewhere.

I think you could cut Thalia's Lancers in the board and replace them with some other cards:

Just for the spice you should put Phyrexian Unlife in your sideboard (it combos with Solemnity if you didn't know) for people who won't be expecting it and don't side in enchantment removal.

Also Stony Silence is a must in your sideboard, especially with all the artifact BS going on in Modern right now.

I've been using Ajani's Mantra + Dawn of Hope for all of my card draw needs.

Thanks for your long comment. I really appreciate how people like you spend loads of time and effort into helping a person like me. Sorry for responding late, I have been swamped with schoolwork and have had no chance to reply until now.

Now on to your cuts.