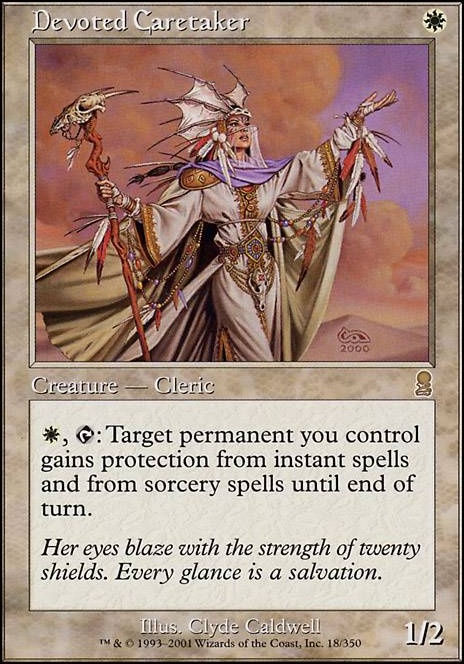 {{W}}, Tap: Target permanent you control gains protection from instants and from sorceries until end of turn. 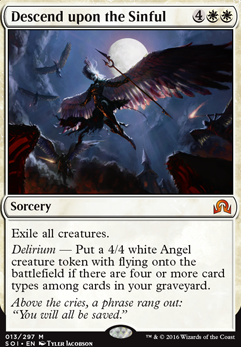 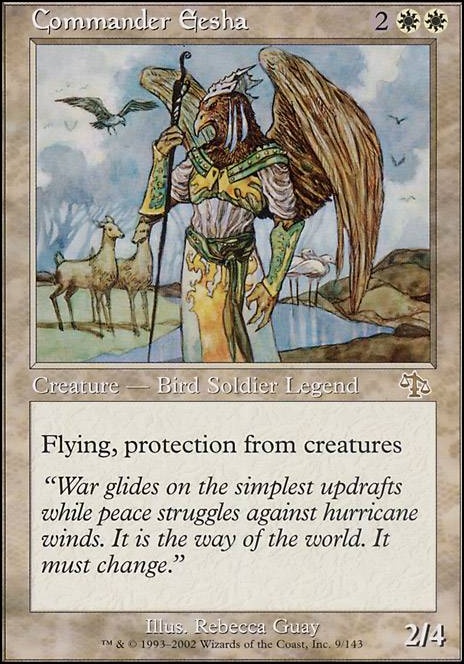 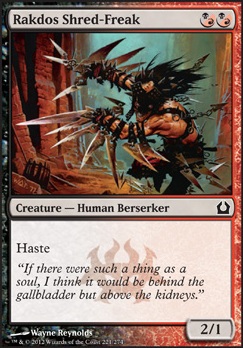 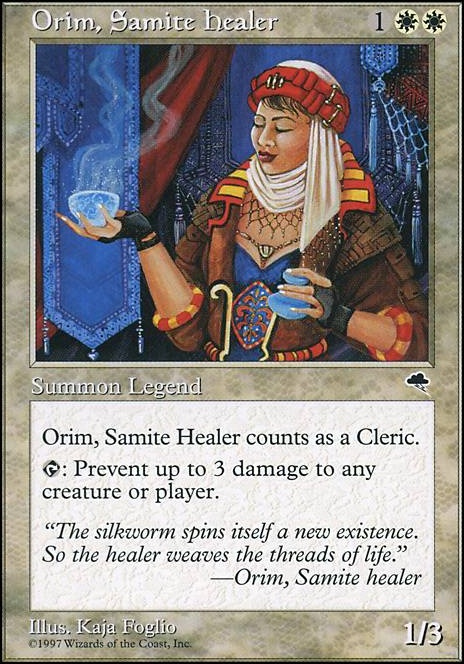 Oops all humans
by Somedutch

Devoted Caretaker is capable of protecting Equipment from removal spells. It's not going anywhere.

Swapping Mother of Runes is a possibility, if saving creatures from colorless removal is worth not being able to protect itself. Pro-Colourless is not something this deck can take full advantage of.

Unsure if I want to use all three.

Thanks for your comment hkhssweiss, I appreciate you taking the time!

I personally dislike the use of Contamination : I'm not mono-black, so it could screw me over, and it seems as though it'd be overly dependent on Bitterblossom to work, or it'd be a waste of reanimation as it might require me to sacrifice something too valuable to lose (I'm not fond of having to sacrifice a Crypt Ghast, for example)

Entomb - I could see myself running, 1 mana for an expensive play with a reanimation card. It'll take some time to figure out what would be worth cutting to make room for it.

Buried Alive - I don't run mass reanimation, and having to put several good cards into the yard with only a way to reanimate one per turn seems like a guarantee that my yard would be targetted

Dance of the Dead - I could probably make use of another reanimation spell, but I don't have a good card in mind to cut for it, do you?

Necromancy - Flash reanimation is yet to be needed, though if the situation changes, I'll find room for necromancy, but for the time being, maybeboard

Land Tax - Card advantage, sure, but it's very limited in scope in this deck, with only 15 targets, that's 5 triggers at most, and discarding lands isn't something I want to be doing. Plus it only triggers if I have fewer lands than others, which, even though I'm in white/black, is actually kind of an uncommon site. And overall, it's only truly good if gotten early on, as having a land tax turn 10 isn't that good for anything other than extorting or devotion.

Smothering Tithe - Good ramp, especially in white with such a high curve. I personally don't see a good card to remove over it and would appreciate your input

Scroll Rack - Also a good card, especially for getting rid of a stale hand.

Leave No Trace - Since I lack mass enchantment removal, definitely worthwhile to make room for it.

Devoted Caretaker - I don't know about this I feel that if I were to run protection, I'd run Mother of Runes instead. But to determine the usefulness of protection, I'll have to run a few tests.

Leonin Relic-Warder - Aside from the fact it goes infinite with a drain card, it seems like a waste of a slot in this deck. If I don't have the required card and I play it and exile someone's thing, saccing it becomes a no-no, so it's dead in play and doesn't do much to help us win.

And I don't see how Fiend Hunter can lead to a lockdown effect with the Dragon Spirits, as, for their ability to trigger, they must die. Mind expanding on that?

I look forward to hearing back from you!

Have you considered running a couple of these cards?

The biggest issue I see however with the deck is actually the CMC curve, it's a bit on the high end side and since you are going for the combo reanimation route you can opt to run more redundancy and protection package. You can consider also running Leave No Trace as tech cards or Devoted Caretaker as well. Leonin Relic-Warder is also a great inclusion since it can go infinite with any of the enchantment spells and you would only need a drain effect to kill the table. Not to mention Sun Titan as well, Fiend Hunter can also lead to a lock down effect with Yosei or drain with Kokusho.

So a lil update, I was able to test out Smothering Tithe from the new set and also some Devoted Caretaker shenanigans. Having Caretaker protect your permanents is extremely amazing. Smothering Tithe with Armageddon / Ravages of War is an absolute beast as well!

If you wanna try it out, maybe consider playtesting with Tithe, it's been a real house in certain decks.