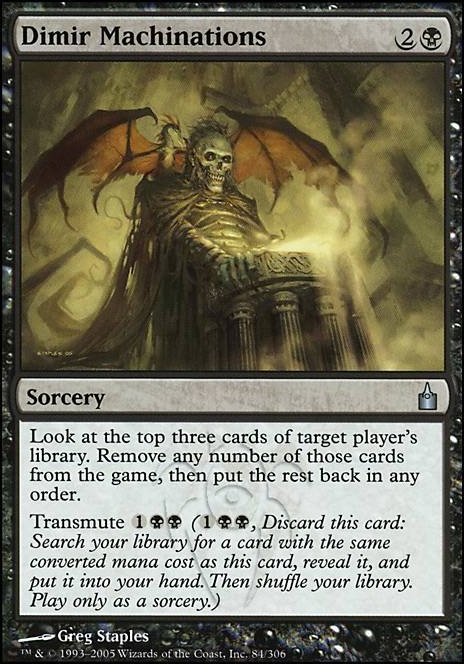 Look at the top three cards of target player's library. Remove any number of those cards from the game, then put the rest back in any order.

Dimir Machinations occurrence in decks from the last year

Anje, the cruelest of them all
by Daggerfella

Licia, Sanguine Tribune | Your Pain My Gain
by TheRussBuss

You could try the route that I went and run a few tutors to effectively up the Tainted Remedy count. I'm running Mastermind's Acquisition because I like the flexibility, but you could just as easily go for Idyllic Tutor or Dark Petition or even Dimir Machinations .

I agree, better tutors such as Demonic Tutor , Vampiric Tutor , and Beseech the Queen are all good. But also, try using the Transmute ability, like on Dimir Machinations . You can find other transmute cards for your deck here: https://gatherer.wizards.com/Pages/Search/Default.aspx?text=+[transmute]. I would also add Bloodstained Mire , Evolving Wilds and Prismatic Vista to your deck, but that isn't as necessary as the tutors. Liliana Vess is also a five mana tutor that can be used twice, over two turns, and infinitely if you buff it a bit over time. And the last thing, when you are trying to explain the infinite combos try pressing the icon when your writing that looks like a paper with a folded corner, located above the writing box. Then type in the card you are talking about and it will come out like this: Animate Dead , instead of Animate Dead, that way more people understand the combo. Otherwise, nice work, and if you found any of my suggestions helpful I would appreciate it if you upvote my deck: A Deal With the Devil EDH! Good luck on your deck, and have a nice day. :)

I would remove the following cards and replace them with the following, following cards: (I think that makes sense) Remove: Kozilek, Butcher of Truth , Captain Lannery Storm , Commander's Sphere , Blink of an Eye , and possibly Narset, Parter of Veils . Replace Arcane Signet , Teferi's Puzzle Box , Reforge the Soul , Niv-Mizzet, the Firemind and maybe some more ramp. But the biggest change you could do that might make it better is use Nekusar, the Mindrazer as the commander. This way you could use all the amazing black tutors, and still combo off with Niv Mizzet, and still have a wheel commander. Some tutors you could use are here: Vampiric Tutor , Demonic Tutor , Beseech the Queen , Diabolic Tutor , Mastermind's Acquisition , Cruel Tutor , Dark Petition , Dimir Machinations , Final Parting , Grim Tutor , Imperial Seal , and more. This way, you could tutor for either of the Niv Mizzets, and one of the combos to win! All the while keeping your wheel theme. I don't know about you, but that's what I would do.

In re Anguished Unmaking : I think it depends on your meta. If you need to be policing a wide range of "must answer" threats (value engine pieces; voltron pieces; combo/recursion pieces that are threatening to take over or end the game), it might be worth including as nothing is as flexible at instant speed save for Assassin's Trophy . I still like trying to keep the CMC on my interaction suite down to 1-2 CMC, since the deck is so mana hungry. My heavy tutor package can allow for a smaller suite of narrower answers in a pinch, but I'd almost rather try, for your list, testing with Abrupt Decay and Despark alongside Assassin's Trophy , instead of Anguished Unmaking . My list is a little greedy/more focused on facing opposing creature-based strategies, as a lot of the interaction/removal is stapled to a Dragon and only can hit creatures, but really I think it comes down to both decks needing a LOT of mana/to tap out on our turn to function on curve (hence prioritizing the most cheap and efficient removal is key).

I'm also looking at putting in one more expensive blow-out sweeper for games where I know I'll be behind and likely am sandbagging; probably something like Akroma's Vengeance , which can at least cycle if it is dead in hand. But that's more for pods where we're playing at 75% or lower.

In place of some of the more expensive tutors, since we're not a combo deck and blue is a splash color, I would look first to Lim-Dul's Vault , then to cheaper tutors like Scheming Symmetry , Eladamri's Call , Diabolic Intent , Dimir Machinations , Beseech the Queen , Praetor's Grasp , or Muddle the Mixture , which are all $10 or less.

"In strange times even death can die."

Interesting idea! Some things to consider:

Demonic Consultation naming Mirror of Fate acts as a more mana-intensive alternative to doomsday, and it wouldn't exile your graveyard. The mirror also works nicely with Necropotence.

I'm sure you can make room for some of these by removing some of those extra Muck Drubbs and Tainted Pacts :P

barely_audible_fart: Thank you for the correction. I must have been doing so much Doomsday math that I couldnât count by the time I wrote the line out.

DreadSpud: First of all, thanks for the compliment! Second of all, Iâm glad your enjoyed the brewing process! The deck is constantly evolving with all the new ideas people are bringing to the table. The next phase may be including a slightly better reanimation package. Necromancy , Animate Dead , Razaketh , and Final Parting are on the radar, as well as Dimir Machinations for the current iteration. Keep contributing and I hope you enjoy playing Kârrik!

This looks like a really fun zombies deck with a lot of flexibility.

Shred Memory is useful graveyard hate that can also be used to tutor up one of your two-drops (like Altar of Dementia). Dimir Machinations is a possible tutor for your Ashnod's Altar that could also just be used to deal with something like an opponent's scry. The more ways you can get access to your free, instant-speed sac outlets, the better.

I run Phyrexian Reclamation over Ghoulcaller's Chant.The life loss can be mitigated with something like Bontu's Monument (searchable with Dimir Machinations).

I don't like Temple of the False God because it's shut me out of producing mana too many times, and I think something like Crypt of Agadeem might offer better options for a deck like this.