Callaphe, Beloved of the Sea

Creatures and enchantments you control have "Spells your opponents cast that target this permanent cost more to cast." 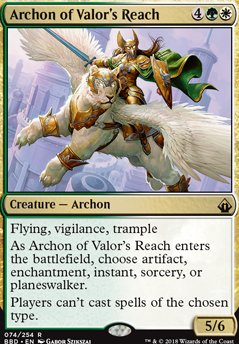 Callaphe, Beloved of the Sea Discussion

Haven't touched the deck in quite a while outside of throwing Hall of Heliod's Generosity in when MH came out.

There are some seemingly obvious includes from TBD: Calix, Destiny's Hand and Setessan Champion

There are some fun ones I'm considering too: Wellspring seems unobtrusive and interesting, especially outside of blue.

There's a lot from TBD that seem niche but might be good: Callaphe, Beloved of the Sea might do enough.
Dawn Evangel I feel lacks targets.
Destiny Spinner looks fun.
Flicker of Fate is cute.
Transcendent Envoy over Danitha Capashen, Paragon?

I much prefer input from friends over staring at EDHREC, so I'm looking forward to what you have to suggest in general.

I've got two decks to add:

PhotogenicParasympathetic on The little Timmy wants to ...

23 Lands seems ok for me. I would cut on Nadir Kraken.

I remember that Kiora Bests the Sea God is almost a second Agent of Treachery and give you a 8/8 with hexproof.

For sideboard you may put Callaphe, Beloved of the Sea