Lethal damage dealt to creatures you control is determined by their power rather than their toughness. Godzilla Vs. CMC Balance
by DensetsuV

Once you go Surrak, you never go back
by therealmadcreators 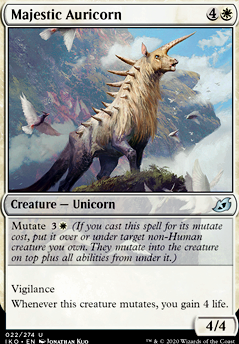 This is very cool. I'm an absolute Timmy at heart, and I've wanted to play Al and Hal for a while, but couldn't acquire them yet.

Some cards I love in the two most timmy decks of mine are the following:

Moraug, Fury of Akoum , Etali, Primal Storm and Terror of the Peaks .

Caerwyn on How do You Feel about â¦

I do not mind any secret lair reprinting existing cards - more cards in circulation and new arts only serves to benefit players.

I am not fond of mechanically unique cards as secret lairs, but I wouldnât be abjectly against them if they followed the Zilortha, Strength Incarnate model. Including a placeholder name for a card that does not currently exist, but could exist in the future, is just basic common sense. Not only would it give players options for âMagicâ versions of mechanically unique cards somewhere down the line, it would avoid issues where copyrights or trademarks make it impossible for Wizards to reprint things.

I think they horrifically dropped the ball with the Walking Dead product, specifically because it failed to include placeholder names. But thatâs the only drop I take issue with.

Cirdan13: The size of a creature isn't exactly connected to its CMC/mana value (trying to accomodate to that). It may be that way, but that's a point where gameplay strikes flavour. Just look at Traxos, Scourge of Kroog , Doran, the Siege Tower or frickin' Zilortha, Strength Incarnate . These things a ginormous, but are four, three and five mana.

Whenever ~ deals combat damage to an opponent, you may return it to its owner's hand. If you do, untap up to three target lands.

All creatures able to block ~ do so.

Whenever ~ blocks, it gains indestructible until end of turn.

Create two legendary cats that Partner with each other.