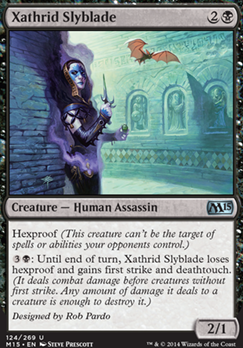 Hexproof (The creature can't be the target of spells or abilities your opponents control.)

{3}{B}: Until end of turn, Xathrid Skyblade loses hexproof and gains first strike and deathtouch. (It deals combat damage before creatures without first strike. Any amount of damage it deals to a creature is enough to destroy it.)

Make your own commander!

hey, just heads up you cant mutant Xathrid Slyblade as it is human. I'm working on a Otrimi deck and been having that issue few times too

I'd recommend Cairn Wanderer , as he can get these abilities even if they stay in the graveyard. I'd also suggest Mowu, Loyal Companion for both Vigilance and trample. Majestic Myriarch might also be a good combo with your commander. Graveshifter May be useful for cards killed early on. I'd also recommend First strike Deathtouchers to make you commander awesome at blocking, such as Glissa, the Traitor and Xathrid Slyblade .

I also like Angels, myself playing them in legacy: Exil-Flicker (Legacy).

hoping some day there will be an avacyn angel planeswalker

The effect your replicating is Xathrid Slyblade , but unlike the Slyblade your creatures don't have any protection. Glissa, the Traitor also has both deathtouch and first strike, it even has a degree of synergy with your equipment. Ambush Viper has flash, so it can essentially function as a kill spell. Arena is a repeatable fight effect stapled to a land. The gods, Rhonas the Indomitable and Pharika, God of Affliction could be made for this deck, given it's themes...

Majestic Myriarch, isn't a new idea Cairn Wanderer , Soulflayer and Odric, Lunarch Marshal , but since none of your creatures have trample (sure they could Chariot of Victory but it costs 3 to cast and you only have 2) it can still be chump blocked by Lingering Souls in most cases.You could run Skinshifter , to provide trample or flying, alternatively use a cheap trampler like Charging Badger . Hope this helps, good luck brewing your deck.

Exactly the type of list I'd be planning to make with Mairsil... Mostly here looking for inspiration, and will probably dig into some things from this.

Here's some of my jank for you.- Helldozer because Wizards kind of directly told us they wanted us to play Non-basic land removal with Ixalan.

You can hopefully tell Mairsil makes me very happy.