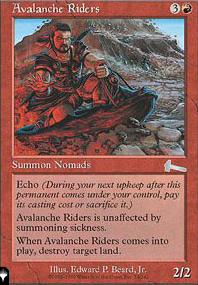 Thatâs so cheeky, Kiki-Jiki!
by Sniffboy

My suggestion for this one is that you go all-in on the graveyard synergy, because realistically, the instant and sorcery package is going to be a whole lot less effective than running utility creatures since it just hits the bin with no effect (e.g. Avalanche Riders over Seismic Spike , Balthor the Defiled over Living Death , Magus of the Moon over Blood Moon , you get the idea). If you need help with finding ideas for utility creatures and engine pieces, check out my list, I've worked on it WAYY too much.

Alesha, Who Smiles at Combo

If you're struggling against stax, I would recommend more enchantment removal. Disenchant , Fragmentize and Wear / Tear are all good options. Utter End feels too expensive here.

Silence is one of the best combo protection spells you can run.

The Exquisite Blood / Cliffhaven Vampire combo seems out of place here. you're better off focusing on overlapping combos rather than having a combo which doesn't really interact with any other pieces. Torgaar, Famine Incarnate is expensive and slow, plus isn't actually a win condition. Avalanche Riders , Stuffy Doll and Silent Arbiter could be replaced for more combo density. Unless you're in a beats heavy meta, Maze of Ith also seems out of place.

Goblin Bombardment is another solid outlet, I'm also surprised there's no Viscera Seer . Painful Truths is generally better than Phyrexian Arena . Wheel of Fortune is another good draw card you're not running.

I think you might be cooking with something here, Vivien's Arkbow to turn extra lands into Fulminator Mage , Avalanche Riders and Acidic Slime seems sweet.

Lambofan217 I would say these two are interchangable, Fulminator Mage has the nice effect that you can decide when to activate it, but Avalanche Riders has the small upside that it hits basic lands and has haste. I just already had a sweet foil FNM promo Avalanche Riders and decided to put that in the deck :)

multimedia thanks for the suggestions mate! I appreciate it!

I was actually also thinking off Aurelia, the Warleader . Most importantly because I think the card is awesome, but it could help closing games in the late-game. What do you think?