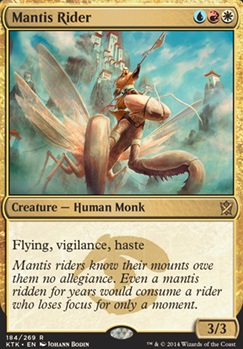 plakjekaas on Quest for weirdness

let's get some love for Mantis Rider in modern

SynergyBuild on Modern to Commander

bChulane doesn't really go with any of the tempo disruption strategies that Modern Humans has. It really feels like a normal edh creature deck, which just happens to use the same creature type.

Modern Humans is entirely based on Kitesail Freebooter's ability with Meddling Mage to shut out combo decks, Thalia, Guardian of Thraben's ability to slow them down and protect your board, and the Champion of the Parish, Mantis Rider, Thalia's Lieutenant setup to end the game at fast speeds with the otherwise weak hatebears. Adding in the rest of the deck you see that the goal of Humans isn't to combo with humans, but to be an anti-noncreature deck with hatebears, which use Aether Vial to get around counterspells, and then use Cavern of Souls as well as a tribal base just to pump out a bit more damage and consistency in the Modern format.

Drawing cards and playing additional lands as you speed through your deck of creatures isn't Humans, it's much more akin to Legacy Elves.

Icbrgr on Jeskai in Pioneer

I think I would go into the direction of Mantis Rider Aggro... Boros agrro has a lot of tools in standard ATM anyway and it seems that Chart a Course seems like it would fit into the gameplan and give room for more spice and help keep blockers off the field.

From what you've described, there are a few options for decks you could build- the great thing is that you don't have to commit too much to any one of them, by carefully picking non-budget cards that support the playstyle you want, while remembering that you can just change everything else.

Yes, miracle cards should always be cheated in and are build-around. Its absolutely not for everyone.

Bitterblossom is a spectacular card, but most of the matchups blue/red has cheaper/more effective options for- spending on sorting out mana with Shivan Reef / Spirebluff Canal will win you more games.

If you want to run bitterblossom, look at running primarily Black so that you can focus your most expensive cards into one colour, letting you run several decks based on that 'core'. I love black for Inquisition of Kozilek and Fatal Push - a solid removal/hand disruption suite can make almost any deck work, giving you immense freedom in the other slots. That said, it makes for slower games- not commander slow, but still grindy. Red/black has aggro options, but its basically either burn or non-budget.

Remember that if you have a solid manabase, you can run most budget decks in those colours so you arent always bringing the same thing to the table. Delver/Prowess aggro, wizards, Storm, Pili-Pala combo/control, izzet control, Metallurgic Summonings control etc. Blue red also has a lot of interaction without getting grindy, which mostly makes for great gameplay.

If you are looking at flying tribal, blue white Sephara, Sky's Blade Stompy is also well within your budget. The thing about winds lists is that they want a lot of creatures, while delver lists like lots of spells- you tend to end up picking one or the other (unless you are in a weird tokens variant, but that mostly becomes an Intangible Virtue list)

There is also a jeskai variant on the ephara list that runs Lightning Angel and Mantis Rider instead of ephara. Either way, Mausoleum Wanderer and Judge's Familiar deserve a look if you want to go this way- which will pull your lands towards U/W.

If you want to play black, I reccomend at looking at creature/spell synergy based around Unearth with delver, possibly looking for value with cards like Lightning Skelemental . Stick to a fast gameplan, so that you can use pain lands for cheaper mana, or tribal strategies so that you can use Unclaimed Territory

I love playing budget modern- there is something about going 2/1 up against a 2 grand deck with something you put together for fifty which is very satisfying. Whatever people say, you can get wins with tier two cards in competitive metas- you won't crush a tournament, but you can consistantly go 3/2 at fnm, and hold pace with anything a serious modern player brings, even if you never get that edge you need to crush tournaments.