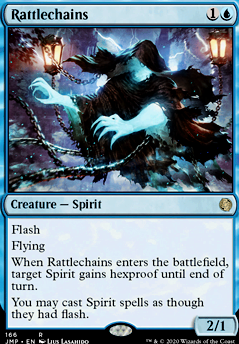 When Rattlechains enters the battlefield, target Spirit gains hexproof until end of turn.

You may cast Spirit spells as though they had flash. 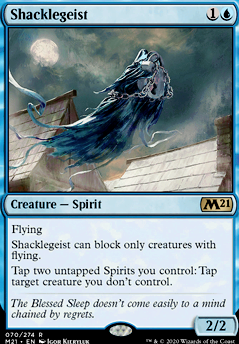 I have tried Inq and Thoughts it can be really good but to be honest its so painful especially with the land pain so Id rather play spirits and get the clock ticking faster.

If I had Aether Vial in this deck, I would probably remove some Rattlechains but really the flash/hexproof is sick and works so good for this deck.

Essence Flux is great for another Rattlechains trigger or protection by blinking.

Id be up for changing Trickbind for Tale's End it has been nice for a counter on legendary spells.

Have you considered this Rattlechains to give your spirits flash?

Hello nice deck, i really like Lingering Souls here. My suggestion is to cut Countersquall Essence Flux Trickbind as well as 3x Rattlechains and put 3x Inquisition of Kozilek and 3x Thoughtseize .

With the recent Soulherder card that's going to be released soon, I am considering building a W/U tribal Spirit deck that centers around bouncing creatures to buff it up, as well as using ETB effects to lock down the opponent. Obviously I would use cards like Nebelgast Herald , Rattlechains , and Spell Queller , as well as cards like Essence Flux , Path to Exile , and maybe even Always Watching ? I'd also maybe like to include Geist of Saint Traft , Brago, King Eternal , and Drogskol Captain if I can, but they may not fit.

I'm hoping I can get some suggestions for card choices here? I pretty much have lands covered and most of the creatures, but any suggestions would be most welcome. I'd like to keep this tribal, too.

In an all-spirit deck like this, I wouldn't leave home without a set of Supreme Phantom . Rattlechains is also a cheap way of messing with combat math throughout the game. Since your two Spiritual Visits only have each other to splice on, I'd recommend something like Topplegeist in their place.