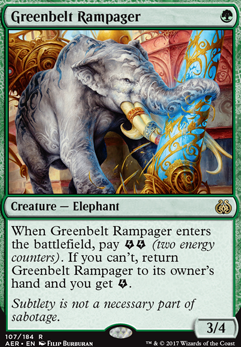 I'm beginning to feel like a Ramp God
by Zamar

Nice list! I love the use of black here as Glint-Sleeve Siphoner is one of my favorite energy cards. However, I will say oftentimes I've found Greenbelt Rampager to not be worth it as it fits really awkwardly on the curve. All you get out of it turn 1 is 1 energy, and turn two, three, and four you're looking to be playing your more important cards like Voltaic Brawler , Lathnu Hellion , Bristling Hydra , etc so the 3/4 body starts to be a little less impressive. Regardless, I love this list!

I like this deck! What I'm concerned about is having something for the one that Burning-Tree Emissary generates. Maybbe something like: Mutagenic Growth , Prey Upon , Rancor or Greenbelt Rampager .

Thanks for the comment Mr_Versatile123!
When I first built the deck, I was unsure of which 1-drop would work best for the deck. Bloodhall Ooze and Greenbelt Rampager were the two contenders. I started off with 2 of each, but once I started playing with the deck, generating didn't seem to be an issue in games where I didn't draw Greenbelt Rampager. Whereas, Ooze synergized so much with Winding Constrictor that I decided to abandon Rampager.

If you wanted to focus more on production, say a build focused around Aetherworks Marvel, then Greenbelt Rampager is a better fit for that sort of deck. That usually takes you out of Jund colors however and probably isn't worth the effort. Not sure though as I've never tried it.

TL;DR: If you want to focus on production, play Greenbelt Rampager
If you like +1/+1 counters, play Bloodhall Ooze

You have a maybeboard. I'm very interested in the deck, and have gotten a lot of the pieces. I want to know your thoughts on what you would cut for Greenbelt Rampager as i own a playset and want to know why you included it. Thanks!

Got a couple of suggestions:

Less lands - just about 20. You want to win by early damage, you shouldn't draw more than 3 lands, and should be able to run with just a couple of them in play. You should also watch for having too many cards at 2+ cmc, since it's not just your first turn that's slowed down, but it takes a while longer, before you can play 2 cards on the same turn.

Exchange Endless One for Champion of Lambholt. You don't really have enough mana for making a really impressive Endless One anyway, and champion gives a bit of evasion to your whole team.

Wans't there a Pelt Collector in this deck earlier on? It should come back. And then, you could add the sometimes-elephant Greenbelt Rampager. That should trigger all the evolvers just fine.