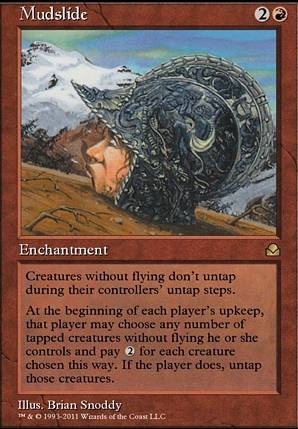 Creatures without flying don't untap during their controllers' untap steps.

At the beginning of each player's upkeep, that player may choose any number of tapped creatures without flying he or she controls and pay (2) for each creature chosen this way. If the player does, untap those creatures.

Roar from the Grave
by HydraOoze 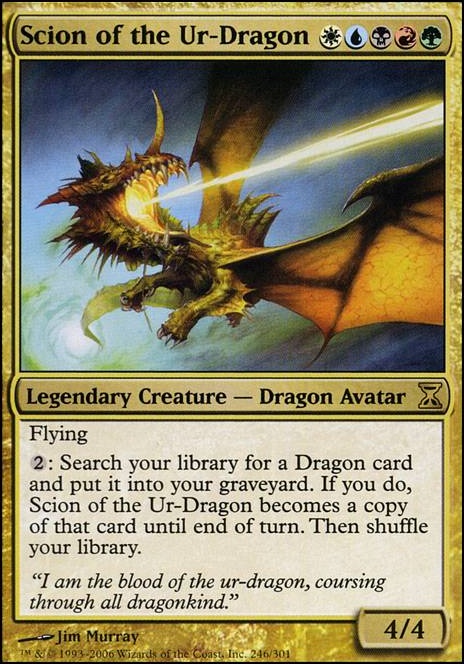 I don't think I'm going to run Bladewing's Thrall or Dragon Scales because without Cathartic Reunion or Faithless Looting they are useless. It would only take up space most of the game, and since they aren't red cards, they would not be able to be played.

I think Fledgling Dragon could be good because it's a red card so it could be played normally, and since it is also a dragon, it will benefit from all of the cards that focus around dragons, like Dragon Tempest

With Dragon Scales , It only returns to the battlefield when a dragon with converted mana cost 6 or greater enters the battlefield, but there are only 4 cards in the deck that cost that much mana. Even if it were to be discarded it would probably stay in the discard for a while.

With Bladewing's Thrall , I think it could be a good card to run, except for the fact that it is unplayable unless you draw Faithless Looting or Cathartic Reunion . It also only has flying if you control a dragon, so If you don't control a dragon, it won't have flying and will be vulnerable to Mudslide and Flame Sweep .

I will add Faithless Looting and Cathartic Reunion because I agree that cycling will be helpful. How many copies should I run?

VladMarkov on Red Dragon - my new ...

I don't think it's rude :) I posted my deck to hear opinions and maybe some criticism :) And I find it good, that you posted your deck, since it contains ideas, I didn't think of - like Mudslide or Urza's Incubator :) Overall - I like the decks, that are not copy of other decks, even if they are based on the same idea. Actually, I gave up damage dealing enchantments (like Purphoros, God of the Forge ), just to have a slot for speeding up large creatures, that should do much more faster. Not that they should always do more in total, but one dragon can deal 18 dmg over 3 turns, and Purphoros deals only 6. Anyway I have to find a spot for Warstorm Surge .

Stax is generally a cEDH strategy--more casual metas do not take kindly to decks that shut down playing the game, and will generally make that clear to the would-be Stax player. I think the red Stax pieces you outlined are strong cards for tuned, casual metas--but they're not enough to see play at the competitive level where you start to see more Stax.

Generally, cEDH games tend to have a lower reliance on creatures, decreasing the efficacy of Smoke and Mudslide . There's just much more utility in shutting down lands--everyone needs lands, regardless of if you are running creatures, artifacts, spellslinging, etc., and Winter Orb effects have a nice synergy with generic tax effects, like Static Orb . The anti-creature Red Stax effects are only going to work against a few decks, such as those with Green, whereas other options cover the whole table. They're just far to susceptible to what your opponents are playing.

Now, Tectonic Instability is a card that goes against lands, but it's really easy to circumvent. In the early game, when you're likely to use all your lands on a turn, you can simply tap for mana in advance of Instability's trigger resolving, and your play is unimpeded. You also give your opponents the option to simply not play lands. As the game progresses, and the need for new lands diminishes, Instability only gets worse.

In my atarka dragon deck I ran both Mudslide and Urabrask the Hidden as a stax combo. There's also Blood Moon And Magus of the Moon

I just learned of some awesome new red stax enchantments and was wondering why they don't see more play.

Smoke is like a red winter orb for creatures. Most competitive green decks run a suite of 1 mana cost dorks, so this slows them drastically. Slows draws from Tymna, and beat down from stax decks. It has some serious defensive applications against wide decks.

Mudslide is another creature hoser, and while players can get out of it, it seems strong in combination with other taxing effects like Sphere of Resistance and friends. Once again this card robs mana dorks of their speed and resilience.

Are these stax effects strong enough to be viable?