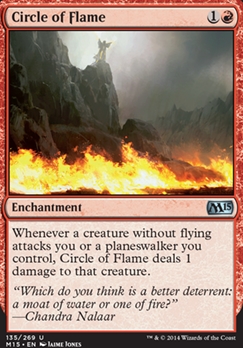 Whenever a creature without flying attacks you or a planeswalker you control, Circle of Flame deals 1 damage to that creature.

Some Men Just Want to Watch The World Burn
by AZURE230

Paint The Town Red
by lcborn

Let's Be Friends
by DrMercury

I would highly recommend using Torbran, Thane of Red Fell over this legend. Though she can give you a lot of cards, it's not permanent. I'd also consider adding enchantments like Circle of Flame and Rite of the Raging Storm to discourage people from attacking you. I also just think that there isn't a lot of cheap red cards which can really win you the game outside of Sneak Attack into some crazy combo.

Either way, seems like an interesting deck with maybe some storm potential. Good luck!

At the beginning of your upkeep, sacrifice an artifact or enchantment.

Whenever a creature attacks you or a planeswalker you control, each creature you control deals 1 damage to that creature.

This is very low budget deck, less than $30, therefore all my card suggestions will be $1 or less. There's several budget cards that can replace current cards here. I'll first list all card suggestions for you to consider and then explain.

For your overall deck:

The card suggestions for your overall deck are cards that can help in all matchups not just against your Goblin opponent. Command Tower and Haven of the Spirit Dragon are Rainbow lands they can make mana of any color (red or green) to cast Dragons. Tower is one of the best lands for multicolor decks in all of Commander. Mana it makes can be used to cast any spell.

Dragon Tempest and Dragon's Hoard are excellent Dragon tribal cards. Tempest giving haste to Dragons as well as a source of damage to a target opponent or creature whenever a Dragon comes into play is very strong. Haste with big powerful Dragons makes them much more threatening to your opponents especially when they get double strike from Atarka. Hoard is a Rainbow mana rock, it can make any color of mana to cast any spell. This is great and another reason it's good is it can be a source of repeatable draw because of Dragons. You put a counter on it when a Dragon ETB (enters the battlefield); can then remove a counter to draw a card.

Talisman of Impulse , Prismatic Lens and Mind Stone are two drop mana rocks. Early game mana rocks and land ramp spells ( Cultivate , Kodama's Reach , Nissa's Pilgrimage ) are cards you want with Dragons. You need early game plays and ramp is the best thing you can do since the faster you can play your big Dragons the more pressure you put on your opponents and the faster you can kill your opponents. Adding more ramp is a good way to beat your Goblin opponent because if you land a big Dragon faster than normal then Goblins will have a hard time dealing with it.

Lathliss, Dragon Queen and Scourge of Valkas are two very good budget Dragons because they give you more value when you play more Dragons, they are also excellent when both are on the battlefield. Lathliss creates Dragon tokens and Scourge does damage to target opponent or creature whenever a Dragon ETB. When a Dragon token is created this means it ETB. The token will trigger abilities of cards like Scourge, Tempest, Hoard, Elemental Bond , etc. Glorybringer is a powerful five drop budget Dragon who can be a repeatable single source of 4 damage to target nonDragon creatures. He's a repeatable way to kill Krenko.

Sarkhan's Triumph and Signal the Clans are budget instant creature tutors to search your library for a specific Dragon such as Lathliss or Steel Hellkite and it put into your hand. Harmonize is good draw for four mana and Elemental Bond can be repeatable draw when Dragons ETB. Magmaquake is an instant creature board wipe that doesn't hurt your Dragons, best of all it can kill all Planeswalkers if you put enough mana into it.

Against your Goblin opponent you want repeatable damage effects. Circle of Flame and AEther Flash do this; Circle prevents your opponent from attacking with 1/1 creatures because any 1/1 creature who attacks will die. Flash does 2 damage to each creature including your own creatures when they ETB. Doing 2 damage to Dragons doesn't kill them, but doing 2 damage to every Goblin that ETB can prevent your opponent from even playing Goblins.

The number one target to kill against Goblins is the Commander Krenko, Mob Boss because his ability can keep making Goblin tokens and this can get out of hand pretty fast. When Krenko dies he goes to the Command Zone, but this can delay your opponent long enough for you to stabilize with a Dragon or two. Incinerate and Mizzium Mortars ; you want a few more low mana cost targeted removal spells that can do 3 or more damage just to be able to kill Krenko. Mortars is unique because for six mana it can instead do 4 damage to just all your opponents creatures.

Early game board wipes are also good against Goblins. Pyroclasm , Sweltering Suns and Slagstorm are budget board wipes that can be cast turn two, three or four which can cripple your Goblin opponent. Sweltering and Slagstorm do 3 damage to all creatures this means they will more times than not kill Krenko since he has 3 toughness, but your Dragons will be fine since most have more than 3 toughness.

Respite is one of many Fog effects in Magic that prevents combat damage, but the reason I chose it as a suggestion is because it also gains you life equal to the number of attacking creatures.

If you like some of these card suggestions I can help you to make cuts.

Ignore Circle of Flame, I misread it in Gatherer.

Which is good but not too good?: Gruul Charm, Clan Defiance or Circle of Flame.

Grubbernaut, this deck would not be legal in most pauper events, especially not MTGO ones. Desert, Circle of Flame, and Ashes to Ashes all have only common printings only in paper. Fortunately, this deck can be modified slightly as to not use those cards quite easily.

Depending on the colours you run and how much you're wanting to build a deck just to combat that specific token threat, there are lots of answers to pesky token-making decks.

BLACK: Illness in the Ranks, Bile Blight, Engineered Plague, Massacre Wurm could just kill him on the spot, Echoing Decay,

WHITE: Path to Exile Krenko, Wrath of God, Day of Judgment, Fumigate, Planar Outburst, Lightmine Field, Magus of the Tabernacle, an Elesh Norn, Grand Cenobite will stop him playing anything ever again, Magus of the Moat, Ghostly Prison, Leyline of Sanctity stops all burn spells

Or play dirty and play RED back against him; Blasphemous Act, Volcanic Fallout, Pyroclasm, Anger of the Gods, Scouring Sands, Circle of Flame, Mob Rule and take all the goblins and kill him with them!