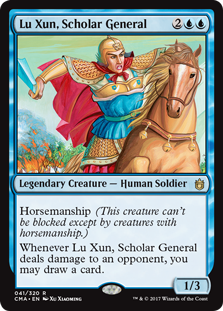 Whenever Lu Xun, Scholar General deals damage to an opponent, you may draw a card. The Chinese Firemind
by Comodou

Underrated Commanders on a Budget: Kestia

Lu Xun, Scholar General could work very well for you and earn you even more card draw and possibly early card draw. Horsemanship pretty much makes him unblockable so you can just keep swinging in for value. Hall of Heliod's Generosity would also fit perfectly in your deck. Thanks for sharing this with us all.

I want to prefance this by saying I don't have a Krav, the Unredeemed / Regna, the Redeemer edh deck nor have I ever played one so their placement isn't something im particularly passionate about.

I've been considering making one lately because I recently made a Karlov deck and I put em in the 99. Whenever I play Krav he's been such a power house and thats in a deck that's not designed around breaking him. In an arostocrats deck the ammount of card draw should be very impressive and akin to having a skullclamp in the zone.

Now honestly idk where he should be. Maybe 3-3.5? But the last tier seems too low to me. Like hes def not 1 or 2 worthy. Probably not not even 2.5 but a draw engine this decent deserves better than to be lumped in with terrible draw engines like The Scorpion God and Lu Xun, Scholar General . Hes at least as good as Sram imo, who is currently 3.

Regna sux lol but she's worth playing just to add white to the deck and who knows, you might find the odd time to cast her.

Consistency in a Can

I'm playing a Rafiq deck myself and have come to love the following cards:

So.. consider those as some suggestions.

SynergyBuild on Quest: The lost soldier

Actually, there is a deck that I alone am a proponent of. I have yet to see another player in all of my years of EDH, looking online, IRL, etc for this commander another user of it:

This commander is simple, a powerful mono-blue commander that while being considered low-tier, can be a powerful unblockable voltron draw-engine, a normal draw engine, or something to attach non-voltron equipment onto.

Ever seen a player be blown out by a few damage? Sword of Feast and Famine making them discard a card, Sigil of Sleep bouncing their biggie into their hand, Sword of Body and Mind milling them ten, and Quietus Spike doesn't help matters on their end ;)

It isn't the best commander, no, however it brings a mono-blue aggro commander onto the field, and can play a great midgame and lategame need be. Like drawing cards? It has you covered, and with extra turn spells for more damage, stacking Tandem Lookout, Sword of Fire and Ice, Fireshrieker and Ophidian Eye or Curiosity, you are drawing some 8 cards a turn, probably drawing another extra turn spell in the process. Sounds like Narset, Enlightened Master some of the time!

Don't worry about the big aggro problems of not being able to deal with threats, you often don't need to tap out, holding up mana for a Swan Song, Counterspell or Into the Roil, sometimes even the overloaded Cyclonic Rift, while still progressing your board by dropping a one or two mana enchantment onto Lu Xun.

Might I suggest Flurry of Wings, Lu Xun, Scholar General, Trostani, Selesnya's Voice to under consideration to be cut?

Hello onehitterquiter, thanks for the view and upvote. This is still very much a build in progress. It currently plays terribly, but is super fun to play, so looking at ways to make it better.

Cephalid Constable is really nice. A great way to control the board state. Might have to slot one it.

Duelist's Heritage of all these suggestions, I think this will be an auto add. Take out one of the more useless equipment pieces. I love that I can not only give my creatures double strike, but in a multi-player game, I can give other creatures as well when I see fit.

Battle Mastery â this is the same cost as Duelistâs and only effects one creature. For that reason, I donât think its as useful.

True Conviction â at 6 mana (and 3 white) I donât think I can justify putting this into the deck. The lifegain that I get from this deck ends up being very secondary to the playing cards.

Cradle of Vitality â I REALLY like this card, just for the ability to make Daxos and the Adept bigger.

Zur's Weirding â I love this card, canât believe I didnât know it existed. Will have to play this deck a couple more times to see how flush my life is. I do like that it wouldnât affect the card I get from Augury Adept, however it would affect my Lu Xun, Scholar General, Last Thoughts and Rhystic Study draws. This might not be the perfect deck for it, but am going to have to get one and figure out a place for it.

Thanks for all the suggestions, there are a couple of solid adds in there for sure.