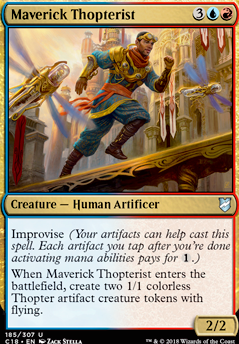 This is probably about as close as you'll get to Brudiclad in PDH. You win just by having a stupid amount of flying tokens, and the gameplay is pretty linear and consistent after you've played it a few times. The advantage over other token decks is that blue gives you a few tutors, extra draw power, and ways to reuse EtB effects.

Your initial goal is to play out some cheap artifacts, then cast your commander. After that, you either return him to hand or chump block with him, then replay him to make even more thopters. The beauty of this is that you can almost always cast him while only using mane from 2 or 3 lands because of improvise. Using your commander as a chump blocker will also keep you alive while your horde of thopters grows to critical mass. You can chip a little damage at a time with spare thopters, but usually, you wait and alpha strike at least one opponent with Trumpet Blast, Raid Bombardment, or something similar.

You tend to have plenty of cards in hand because you spend a lot of mana replaying your commander, but there are several draw spells like Keep Watch that can easily draw 6+ cards for you. For tutors, Trinket Mage usually tutors for Viridian Longbow, Relic of Progenitus, or Leonin Bola, and Drift of Phantasms usually searches for a board wipe deterrent like Hissing Iguanar, or an alpha strike tool like Trumpet Blast, depending on circumstances. Viridian Longbow helps against tokens, Relic helps against graveyard play, and Leonin Bola can lock down a voltron commander or big green things with trample. The final tricks are just the extra value you can get out of Path of Ancestry and Opal Palace by casting your commander so much.

Even with those tutorable countermeasures for large trampling creatures and board wipes, they remain the biggest threats to this deck. As a result, black and green decks and trampling commanders are probably your first targets to kill.

Big Edit (6/9/21): Just swapped out 19 cards. Got rid of some value engines that were just never necessary, even in long games, replacing them with single-use, more mana efficient ways to return the Thopterist to my hand. Also replaced some less useful cheap artifacts with artifacts that cantrip. I also added more interaction to help prevent board wipes, which are this deck's main enemy.