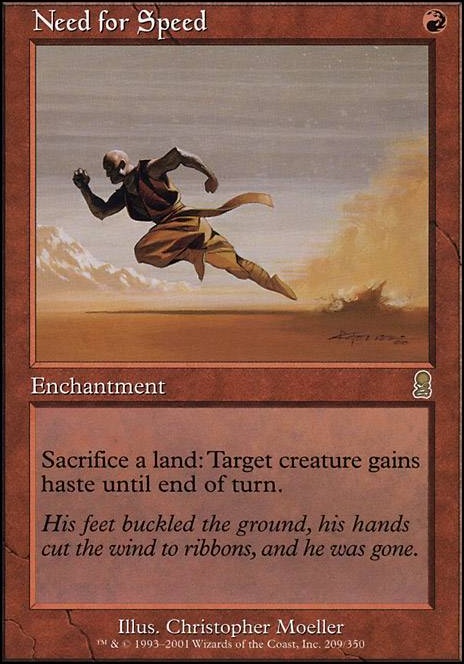 Nicely built but I do have a few suggestions.

Ramp: Pentad Prism is the only 2 drop rock that'll net +2 different colored mana (albeit once). Copy Artifact doubles as any mana rock (or Strionic Resonator #2).

Haste Enablers: Need for Speed, and/or Ashling's Prerogative (especially since all your creatures are even cmc) deserve a spot over Fervor.

Topdeck Manipulation: Brainstorm (had to do a double take... how is this not already in the deck?) and Ancestral Knowledge (before Narset it finds mana rocks and after Narset it sets up absurd turns).

Need for Speed . Sometimes you just need the one haste threat, and you can spare the land. Bonus if filling your graveyard for recursion or Delve is relevant. It flies under the radar in a way that the most popular haste enablers don't, and you can use it on other player's creatures as well.

SteelSentry on What are your favorite underused, â¦

@ channelfireball12345 thank you for the suggestion and I get your point but sadly:

The "commander tax" is an additional cost, but it does not affect what a card's converted mana cost is. Converted mana cost is always based on the mana cost printed on the card; it never accounts for effects that add or reduce actual costs to cast something. It's a bit like kicker costs...

If that wouldn't be the case, this card would be a staple card in almost every red edh-deck. to give narset haste, I prefer Need for Speed(/Footfall Crater), Torch Courier or even Generator Servant.

A kitty with Big Claws

. Mine is my oldest deck (it was an Adun Oakenshield landfall deck prior to the release of our Cat Lord). One of my favorite win-cons in my list is pairing Titania, Protector of Argoth with Need for Speed or Zuran Orb + Anger.

Also, Tectonic Reformation and Wrenn and Six (if you can afford him) are solid additions.

Feel free to take a look at my list for other ideas if you want: This deck has HUGE tracks of land.