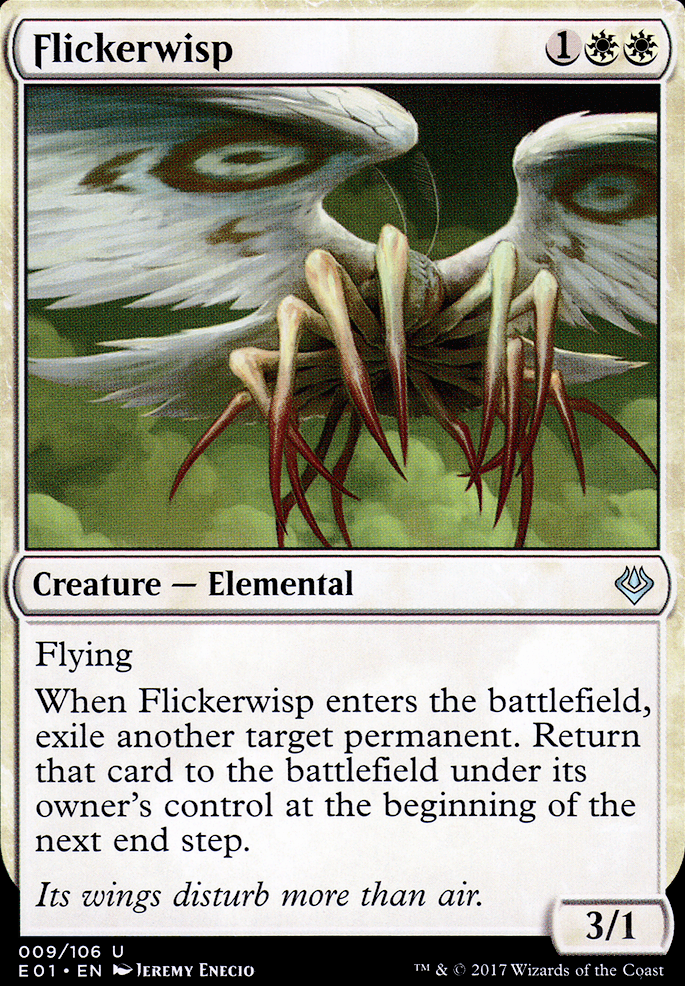 When Flickerwisp enters the battlefield, exile another target permanent. Return that card to the battlefield under its owner's control at the beginning of the next end step.

Flickerwisp occurrence in decks from the last year

Blink it ! esper test
by Nickals-Tresarry

Metropolis39 hey!, thank for your answer!

With the actual lockdown i didn't manage to bring it to any events, but i did play it versus competitive decks, like U/W spirits, red aggro, urza uro, urza tron... and it actually compete pretty well. Early is pretty tuff tho, i often find myself in really low life conditions, but i always manage to survive to get into my exile phase.

Mimic Vat saved me a lot of times, using it on Flickerwisp, Stonehorn Dignitary or Charming Prince is amazing, but yeah i'm thinking of replacing it by Voyager Staff to get more early gestion and putting 2 more Detention Sphere in my sideboard, maybe 2 Damping Sphere to avoid facing huge early mana boost.

I like this a lot. Really nice casual Flicker. My friend's been nagging me to build one for him but I might just steal this lol. Flickerwisp is quite cheap atm so it would be a great staple addition.

Oh, was Horizons after Dominaria? I thought it came before. I was wondering why everyone's suggesting cards from Horizons that I already knew about, haha.

Thanks for the deck. Yesterday I was thinking of how fun it would be to build an Astral Drift control deck with Sundial of the Infinite to exploit the end of turn trigger, I think I might add Flickerwisp and Ephemerate to my mental list and turn it into a more value-midrange type of thing.