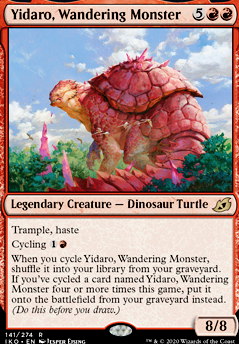 Yidaro, Wandering Monster occurrence in decks from the last year 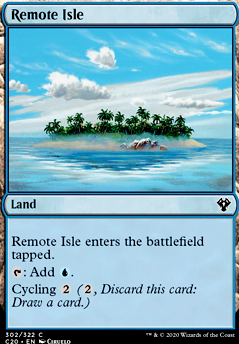 I feel that Yidaro, Wandering Monster doesn't really fit. I mean with all the trying to cycle draw. But even after you've cycled to it many times it will still probably not be worth the mana you spent to get it. I would switch it out for that.

There is Chimeric Idol, Shell of the Last Kappa, Tortoise Formation, and Pattern of Rebirth which just shows a Turtle. And I was thinking if others would be ok with it, you could use Living Wish to grab Yidaro, Wandering Monster so you can have all the turtles.

Why no Quartzwood Crasher? Yidaro, Wandering Monster might work too.

Just so you know, URO is weak to Claim the Firstborn. He has a cmc of 3. I also had another idea as a 1-of: Yidaro, Wandering Monster. He's like the whale, but with trample and haste. Too bad he is legendary.

My only suggestion would to take out 1 or 2 lands for 1 or 2 more Zenith Flares.

I made mine with Blue instead of Black and also use Yidaro, Wandering Monster as a wrench. Inevitable Flare (Doom-Flare).

Did I say you could cast that? V2

You can replace Yidaro, Wandering Monster with Shark Typhoon if you prefer.