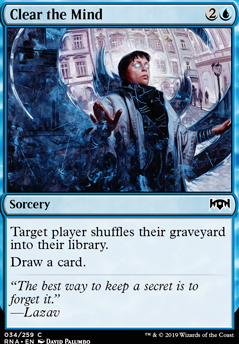 Target player shuffles their graveyard into their library.

Hello dan and thank you for your input. I must admit Clear the Mind actually has saved me from milling myself out on more than one occasion. I do also agree with scorching dragonfire but the thing is Jayas greeting and the scry ability has personally helped me more times than not, though I do run both in the deck. Another worthy note is the fabled passage recommendation, but I find myself extremely low life without that little boost, as I run zero creatures and kind of need that to survive against those lovely mono red players lol. As for the last recommendation of dropping chandras outrage, I canât. Any time I remove it I find myself needing that removal and damage in game, not to mention that it triggers Dovin's Acuity Which then gives me another card to draw and another 2 life. Iâm working on a version 2 of this which will show more of the recommended changes and the added bonus of Shark Typhoon which just gets silly

Leaves From The Vine

you don't have enough mana ramp to reliably cast Shark Typhoon or Thousand-Year Storm. and if you don't draw the Typhoon, you don't have enough ways to deal damage to close out a game. phoenix is just an overcosted flyer since you don't have enough spells to consistently reanimate it. there are better draw spells than Clear the Mind. theres not really a need to shuffle your grave back into your library since you're not playing anything directly from the library. you also need some "hard" removal to take care of big enemy creatures. with the deck as it is now, your 8 burn spells will have to go toward killing small creatures just to survive, which leaves none in hand for if/when you drop the typhoon or storm.

I played a deck like this on Arena. Nasty combinations! I have I would maybe side board Clear the Mind. I know you use some escape cards but may help.

Looks really nice, but no Laboratory Maniac as well as the Lab-man Jace? Also as a heads up, Syr Konrad, the Grim only works if creatures go to the graveyard, or creatures leave your own graveyard. Bouncing them wonât trigger him.

Mind Funeral and Traumatize can both be used to self-mill, and if you can get him attacking consistantly, Fleet Swallower can mill you every turn.

Feldon's Cane is a cheaper cmc version of Clear the Mind although redundancy in a self-mill deck is never a bad idea.