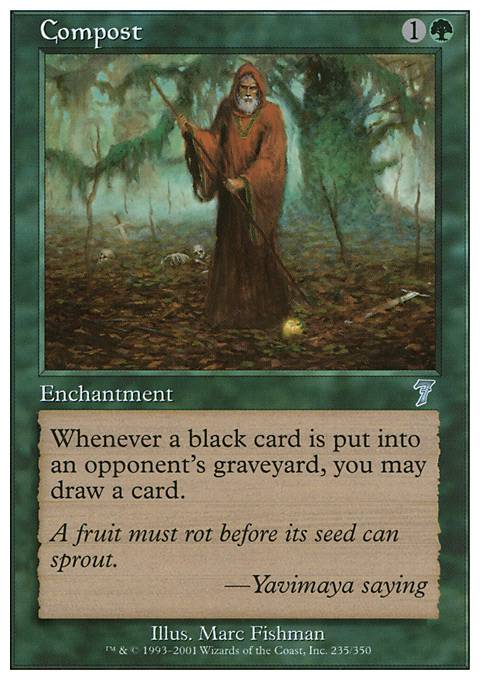 Whenever a black card is put into an opponent's graveyard from anywhere, you may draw a card.

Hi ChibiFate, thank you for the suggestions and questions.

Teferi, Master of Time didn't impress me enough to keep him in the deck. Once I could play him Turn 1 in a four player POD and he was insanely good. But if you draw him after turn four or five, you are better off drawing something like Pull from Tomorrow. The problem is, that it will get very hard to ultimate Teferi, Master of Time once your opponents have some creatures out and just filtering the cards in your hand isn't strong enough as you need extra cards to keep the interaction up as a control player. Hence, I would recommend some other cards that will guarantee you card-advantage in a timely manner without having to wait two to three turns. Therefore the short answer is: in opening hand the card is really broken. After a couple of turns he is "meh" - not really worth the mana.

Compost and Reap are very good cards. The only reason I don't run them is because i rarely play against black. If you are going against one or more black decks you should definitely consider them.

Lithoform Engine is new to me and I never tested it, honestly. However, my first impression is that the card costs too much mana and does not provide enough synergy. If I could copy stuff from my opponents I would consider playing it. However, as this is not the case, I would rather tend to either put Precognition Field back in. But in my case it would make more sense to put Isochron Scepter combo back in as there are many spells I could imprint and copy much cheaper that way.

Oko, Thief of Crowns and Uro, Titan of Nature's Wrath are really strong cards in this built. But you really need to up Oko, Thief of Crowns first until you get a token. Only after that I would advise to start attacking opponents permanents by taking over their creatures. If you consider to play Oko as a longterm threat and not as an immediate removal spell, then he will be very strong. Otherwise he will die pretty quickly and will not bring you continous advantage. If you have Oko, Thief of Crowns in your opening hand and can drop him on turn two, you will have quite a strong position in the game early on.

Hope these answers help you. If you read through the deck description you will see that this Rashmi deck is somewhat different from most builds and I try to grind especially hard.

You want to play Reap and Compost in this deck 100%

A few questions for a fellow Rashmi Control player. How has Oko, Thief of Crowns peformed for you?

Do you struggle against Niv-Mizzet, Parun?

Would you consider Lithoform Engine without Isochron Scepter/Dramatic Reversal Combo?

How did Teferi, Master of Time perform?

Considered Compost for the maybeboard?

Neat interaction, hadnât thought of that. I tend to shy away from infinite combos like this, my playgroup doesnât really appreciate them, and I donât mind not playing them. Keeps games a little more interesting i feel. If youâre going for power though, it sounds great!

Thanks for the insight. Iâll have to think on it a bit. With regards to what to cut for Into the North: i donât see Compost in the list? Perhaps a land. 42 seems like a lot, even though itâs the answer to life, the universe and everything. Sensei's Divining Top seems odd too, but iâm sure iâm missing something there.

Do you have an opinion on my Khalni Heart Expedition and Devoted Druid as ramp and Summoner's Pact as tutor? They seemed good to me but i donât see them around really.

Rasaru, I think you make a fantastic case for Sekki, Seasons' Guide and Tooth and Nail. It seems to me like the combo is powerful enough to deserve slots in the main list! It makes me wonder if Craterhoof Behemoth should be slotted out. Part of me wants to for deck consistency, but part of me doesn't because it wins games with Avenger of Zendikar and I'm even less sure if it's a good idea to cut Avenger of Zendikar. Plus Craterhoof and Avenger together give us an alt Tooth and Nail win con. I'm gonna have to give this a good deal of thought. Would you have any recommendations for cuts in my list for Tooth and Nail and Sekki, Seasons' Guide?

Savage1988, first off Into the North is a fabulous suggestion. Another card that might also deserve a slot in the main list! Crazy day this is. Same question, would you mind taking a look at my list to consider a possible cut? Maybe Compost?

I would say that Eternal Witness, Skullclamp, Steely Resolve, Life from the Loam, and Exploration are all about equal priority to add to your deck. The differences between choosing one over another are very very minute, but I would prioritize the cards in that order if I had to choose. I hope that answers your Exploration question, as I still value Exploration very highly!

After testing Skullclump, I've found it's just dummy good. After you pay 1 to equip to an elemental just to sac it to an outlet to deal 3 AND draw 2, you'll be wondering why you questioned the power of the card. Our colors also considerably lack draw, which tells me that you should be happy to take more draw where you can get it.

I also wouldn't underestimate Steely Resolve. Like you implied, at some point you have to make cuts to protection, but I think Steely Resolve is just a little too good. Think of it as Lightning Greaves, but your opponents don't get to respond to you equipping it to Omnath, Locus of Rage.

At first it seems like common sense to run Zendikar's Roil, but I've found it's not aggressive enough.

I mean, maybe? That seems like a dream land where players don't win out of nowhere. Not really the cEDH I know of, but sure! Oko often won't be able to survive in that way, because players will just kill it if it annoys them. Removal still beats Oko, it's just that as a walker it dies to creatures too, which is my issue with it. That's all. It isn't a bad card because of it, it's just slightly less amazing.

Separately Study has been a card that needs to be played properly (not thrown out as a draw engine like a Tymna). It is efficient against storm, think Compost, and when played against opponents early on it can be absurd. Late game it's a meh card but so are a lot of cEDH cards.