Search your library for up to four cards with different names and reveal them. Target opponent chooses two of those cards. Put the chosen cards into your graveyard and the rest into your hand. Then shuffle your library.

Gifts Ungiven occurrence in decks from the last year 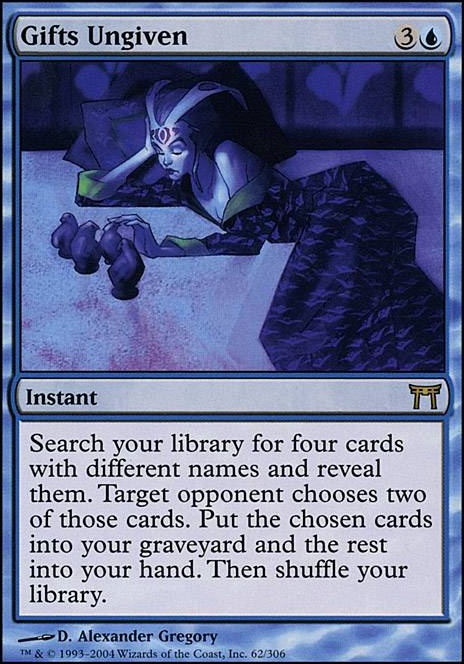 Sultai - The Gifts that Keep on Giving
by T12H 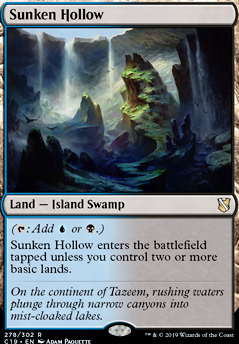 @enpc: Yeah, you'd definitely have to tinker with the points spread to accommodate Enlightened Tutor , but I'd say it's probably worth downgrading Mystical Tutor or Gifts Ungiven to get there.

Aaaand just after I submitted that comment I thought of a deck abusing failing to find and how it may not be clear that the usage is perfectly acceptable via the rules.

(After typing this up I have noticed that the Modern Masters and newer Gifts Ungiven have been printed with errata that makes it "up to four cards" that you are searching for. This is not functional errata, it was probably just so that you didn't have to dive into the rules to know that what was going on was legal.)

I would swap Diabolic Edict out for Liliana's Triumph as it can get through Leyline of Sanctity . Depending on how you want your deck to function Gifts Ungiven could be just better than Fact or Fiction , likewise I do not agree with having three Fact or Fiction and think you should swap at least one out for Hieroglyphic Illumination , as though Fact or Fiction could provide more card advantage, it can also get stuck in your hand during the early turns- when you would much prefer it to be Fact or Fiction .

devyer on What card should I use?

Any idea between what could be the best for my deck Frantic Search and Gifts Ungiven ?

devyer on What card should I use?

I currently have a dilemma about what card should I use between Contingency Plan and Gifts Ungiven for my Deck Arise, Loyal Servants.

Which one you think is the best for this deck. Or should I use both?

I like how both can setup my game but I can't make my mind.

this deck is not Edh-Legal. You should cut Gifts Ungiven for Final Parting

I'm all about playing with my resources and trading them for whatever's best for me at the moment. "I'm prepared to make that sacrifice"

Dark Confidant - Playing with my life. It doesn't matter until it's 0, and even then a well-placed Phyrexian Unlife or Angel's Grace can save me.

Trading Post - I love artifacts, and I'll gladly re-purpose them for something else - then rebuild them. Every one of my resources can become another one at my whim.

Beacon of Tomorrows - When I run out of resources, this is how I get more. Out of card in my library? Infinitly loop this. Out of mana? Get another turn. Out of attacks? Same answer. This is how I close out my games once I've juiced them for every drop of power I can get.

Dream Salvage - My opponent has resources too. There's no way around that. But I can make a better use out of them then they can.

Gifts Ungiven - The illusion of choice is the cruelest punishment. You think you can choose what I get? Every choice is wrong.

Unburial Rites - The dead are my playthings. A fantastic piece of value, Rites can either give me 2 fantastic reanimator spells, or effectively a draw when you mill/discard it.

Counterspell - The classic. A universal answer that will keep your opponent off of doing anything that can disrupt you.

And this leaves my planeswalker. The only planeswalker that would fit these colors is Aminatou, the Fateshifter , but I would say that I identify more with Ashiok, Dream Render

because it puts the opponents of of resources and can fuel yours.