When Dragonlord Atarka enters he battlefield, it deals 5 damage divided as you choose among any number of target creatures and/or planeswalkers your opponents control.

Dragonlord Atarka occurrence in decks from the last year 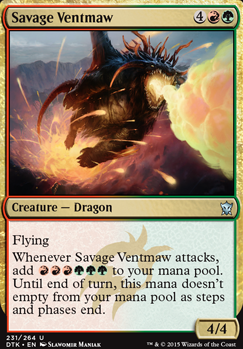 EDH deck for Max
by Sashimi58 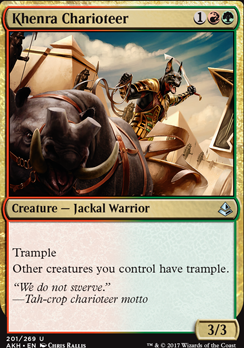 Death From Above
by Subzero6977

Ur You Sure?
by EnnCeeBee

So I was looking over your deck here and I think it looks pretty solid. However a couple of the cards I think were a bit mana heavy or didn't do enough as far as removal goes is Dragonlord Atarka and Volcanic Offering . Reason I say this is Dragonlord while a great body it only does 5 damage and it only does it once. Volcanic Offering while it forces your opponents to go at each other while leaving you out of it. I had to cut it from my mono Red deck as sometimes there isn't a creature for your opponent to target, or there is nothing but basic lands in play. As unusual as that is I've had it happen to me and it's a dead card in your hand.

I do like Quicksilver Amulet , Tooth and Nail as well, Elvish Piper I saw was mentioned earlier on ways to cheat creatures in. Chord of Calling does seem like it would be good as you do have token generation to pay for the convoke cost. If you're looking for a good board wipe but only for your opponents I would consider Mizzium Mortars when you overload it that's 4 damage to each of your opponents creatures.

The mana excelartion seems great. I did some test draws and loved it. Pretty powerful deck it looks like. I was a bit concern about the higher mana cost stuff but looks like mana is not an issue.

Hopefully this review was helpful.

@SP3CTR3_chelts: Hmm... That could be a good use of a Filler for now. Now for why I threw those things in there: Mox Amber is based upon real-life amber; Fossilized Tree Resin; some even include some kind of prehistoric creature w/ it's form still intact; though I completely understand why WotC wanted to do it this way; it is well cherished by those who collect jewelry. Also, Yes, I understand Nurturing Peatland is a Land, but the philosophy behind it just might work still: Peat is decayed plant matter; dead, but still friendly nevertheless. Regardless, it can even be used in a process that can take several thousand years or more to evolve to a stone-like mass (Given no fire occurs during that time.) after all this time. Both of these kinds of process' involves an idea of Evolution; a concept of PROGRESS; isn't the only one w/ that luxury. As for fliers, Birds of Paradise has actual Bird Wings, & can produce mana In a pinch. Also, Destructor Dragon hates anyone w/ even an Arrowhead. You think you can kill a dragon w/ this kind of weapon? All it's going to do is get pissed off, & kill you as the "Reach" User instead. Ironic, since this Dragon serves Dragonlord Atarka ; which is even MORE ironic as Temur in the Current Timeline has basically the exact same Watermark Base; but the most ironic part of all is that Omnath, Locus of the Roil IS now! I don't think I can put a number on that any further! DX

Moving on: How the heck can a card even exist for Manifest when Inverter of Truth just straight out exiles your library FACE-DOWN, & replaces it w/ a Graveyard this deck doesn't truly need (It is Exile Zone Dependent.). But, you might be on to something though; but how the heck can I even force a whole Exile Zone that's face-down, to Face up? I'm actually interested about these kinds of notions...

I guess what you're saying is that in recorded MTG Multiverse history, even when there was only nature & no city at all, The Ten Paruns of the Original Guildpact was the only root of such history? Honestly, I wonder if there are 10 before the Original Guildpact was even a thought yet. In case there is no such idea, Razia will be a part of the cEDH Boros Community Deck's name.

I was, uh, referring to the Feedback part; I, mean, my "Obsessive Moaning" brought this to fruition. Any idea on that?

Finally, don't worry, you're not missing out on anything at all now; the current saga ruined itself w/ a feature Beys had in place of a sleepout; which at least gave the benefit of the doubt; not so when your bey just separates into the very parts the bey was built upon in the first place. I miss the benefit of the doubt; & a protagonist w/ Left Spin; not a villain w/ Left Spin. It doesn't matter anyway; the show sucks now, & even TAKARA TOMY needs to have a letter written to them about how such a new feature ruined the franchise for life.

I'll shut it about Beyblade though. I think I said enough anyway...

I have been playing a Ilharg, the Raze-Boar based deck on Arena and it has been super fun. I would like to build one in paper (modern rules) and I have the deck almost built. I am looking for three creatures to add to maximize the Ilharg trigger. I am thinking I would like to keep them to creatures I still would cast even if I don't have Ilharg out but are super good if I do have Ilharg out and attacking. So far I have picked Ghalta, Primal Hunger Dragonlord Atarka Pathrazer of Ulamog Can you guys think of anything better than those three??? Thanks.