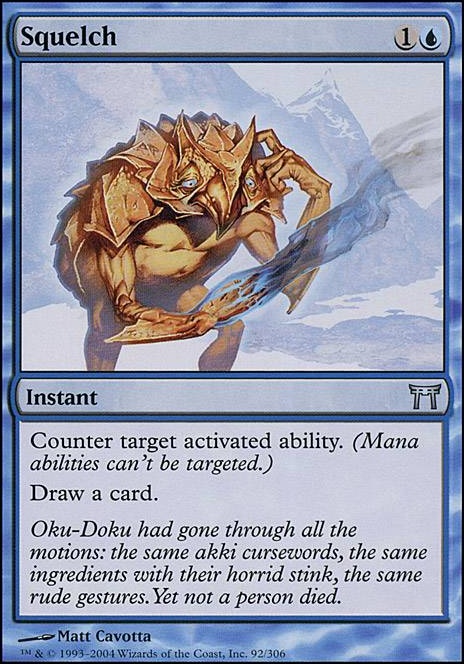 The Spirit of Old Kami
by PeriodicalFits

I would think a Stifle , Squelch , Disallow , Tale's End , Trickbind would just be fun so you can stifle your own braids on your opponents turn this way you can have card advantage. In 1v1 its just mean but in multiplayer it allows the current target to be limited.

clayperce on Thoughts on UG Control?

APPLE01DOJ,
Yeah, maybe ... though the deck generates enough mana that it's probably better to use a three-drop that will also hit triggered abilities (e.g., Nimble Obstructionist , Disallow , Voidslime ). I'll definitely keep Squelch in mind though once I start testing!

APPLE01DOJ on Thoughts on UG Control?

hungry000 Interesting points. Thing in the Ice  Flip is definitely a problem for this deck. Trickbind ing Thing only stalls to their next instant or sorcery and and Trickbind ing Phoenix only works on 1 Phoenix at a time. But being able to stall like that is a real tempo swing. Post-board my Rest in Peace is nice, but not enough.

I don't think either Trickbind or Squelch is where I want to be in this meta. UW Control is very low in metagame share. Tron is lower than before and I have other ways to fight them. I've been toying with the idea of Mishra's Bauble . Pumping Tarmogoyf to 5/6 vs Gurmag Angler or Lightning Axe is nice. It's also a way to 'scry' for Delver of Secrets

Flip. I'll try swapping out Squelch and see what happens.

I think Trickbind is better than Squelch right now. The card draw + land destruction is a nice tempo swing against fair decks, but the most played deck atm is Izzet Phoenix, so it's good to have the ability to counter an Arclight Phoenix trigger and especially a Thing in the Ice  Flip flip since you're pretty creature-heavy. It's only a temporary solution for both of those cards, but it's nice to have the option.