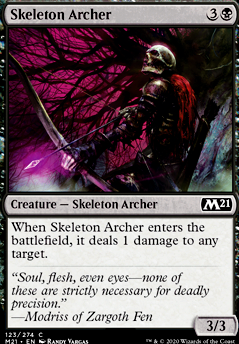 When Skeleton Archer enters the battlefield, it deals 1 damage to target creature, player or planeswalker. 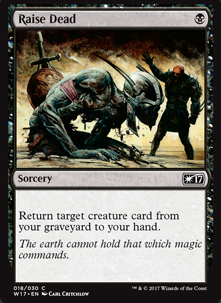 I think that would be better, especially since Skeleton Archer isnt a zombie anyways. What about Plague Mare instead of Fell Specter? It could weaken or wipe your opponents board.

Legendary_Shadow I'm also thinking of getting rid of Skeleton Archer in favour of another Poison-Tip Archer I know it's not a zombie but it is just good!

Kinda cool but I would like to give you some suggestions. Take out Bone Dragon and take in 2 other Josu Vess, Lich Knight Take out Skeleton Archer and take in 3 Cast Down Take out Whisper, Blood Liturgist and take in 3 Walk the Plank Take out 1 Ravenous Chupacabra and take in 1 more Graveyard Marshal Take out Doomed Dissenter and take in a solid drop Diregraf Ghoul Hope it might help !

Thanks for commenting! TMBRLZ, Open the Graves would change the playstyle of the deck a bit, but it's a great card! If I find that my current approach isn't cutting it, a more midrange deck with several copies could be good! I definitely see the appeal of Skeleton Archer, and have added 3 copies to the sideboard. Infectious Horror isn't bad, but if I can play Josu Vess, Lich Knight for the same cmc, I'd rather run him.

Bxbx, thanks for the further input, it's much appreciated. I will attempt to get my hands on a few Lilianas, but until then, I definitely see your points on the other cards. Necrotic Wound has been replaced with more reliable kill spells. Tattered Mummy has been replaced with Graveyard Marshal. I removed Barrier of Bones to add a few more copies of some key cards. Would you instead recommend running a few copies of Stitcher's Supplier, or are the 4 Diregraf Ghouls sufficient as one drops?

Solid deck. I was looking for some stronger suggestions but you have seemed to cover everything pretty well, while respecting a low curve. I was looking heavily at Infectious Horror and Open the Graves but those obviously disrupt the low avg cmc you're trying to maintain.

One card that would be really nice with Death Baron though is Skeleton Archer. He is a 4 drop, so a little heavy, but with a Baron in play, since Archer is the one dealing damage, deathtouch would be considered, so you can nuke any targetable creatures on the field and resolve a 3/3 (4/4) creature.

Think it would be a solid 2x or 3x in your deck. Excellent work otherwise.