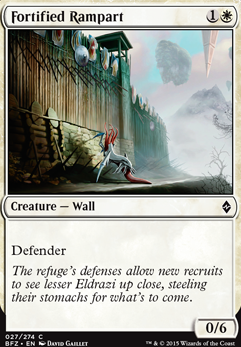 Humpty Dumpty Sat on a Wall
by 2010SailorMoon

Gather informations is the most important thing!

To clarify, I never said Teyo is the card to go here, just that he's better than misako :) If you want to try him out at all in commander, this is probably the only deck where he's worth mentioning. Yeah in my meta arcedes would never stick for a turn cycle. This deck is easily thwarted if you never let Arcedes, High Alert or Assault Formation stick, so being able to fight through that is a must. If you face many counterspells Autumn's Veil is a great addition here as well. I dislike Lightning Greaves and Swiftfoot Boots here since you don't get much for their cost. Ideally this deck goes someting like:

The nice thing about this is that noone is ever gonna remove or counter your walls. You just need to get Arcedes through. Cards like Force of Will Pact of Negation can help here in an extremely counter heavy meta if you want to play arcedes on curve, or you stay back build up to like 30 Damage wich on T7 onwards is often nearly lethal for a player and then play Arcedes for a big swing. Hardly any playgroup will let him stick for long since he also draws a lot of cards, which makes him so good. If you give him hexproof or shroud all you do is force out a sweeper which you don't want to happen at all, so counterspells are clearly the way to go here imho.

Changes I would do right now:

On a Budget add: Slagwurm Armor Might be really good. Will never get removed and 3 mana for +6 seems kinda broken Geist of the Archives Smooth out draws a bit Rampant Growth Fixing and Ramp Meekstone Defense Autumn's Veil Protection/Control

Well I just lately tried to cut some of those big 0/X defenders for 0/x with abilities like i.e. Wall of Deceit for Angelic Wall or Fortified Rampart for Wall of Shards . I think that a little smaller wall with Flying might be better for both offense and defense.

Silence might be good in my deck because I have Intruder Alarm combo.

For boardwipes I actually cut Fell the Mighty because it doesn't deal with Vampires or little utility creatures that can later grow with Overrun effects. Cyclonic Rift and Slaughter the Strong are way better. Also Dusk can be discarded and used as reanimator or against Wheel decks like Nekusar - there is of course dilemma when it comes to casting it but sometimes losing commander is a necessary evil when payout is obliterating everyone else. Another copy of Arcades' effect is Beast Whisperer - 2/3 won't die from Dusk and other effects can be easily duplicated with High Alert and Assault Formation (I run both just to be sure that I reliabaly get them in game, might also add Enlightened Tutor for that reason).