If a creature you control would cause a triggered ability of a permanent you control to trigger by that creature attacking, that ability triggers an additional time. 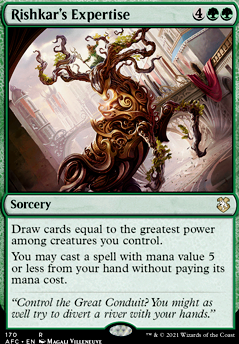 The Saga of Turning Sideways
by GregariousG

I like the build! A lot of good synergies around the sacrifice mechanics. I was brewing a version of my own that focused on the attack triggers, with Wulfgar of Icewind Dale as the 'secret' Commander. Go for extra combats and a dragon sub-theme. Any thoughts on that strategy?

Caerwyn on An additional Wulfgar would trigger â¦

If I pair Wulfgar of Icewind Dale with Helm of the Host I get the non-legendary token copy of him at the beginning of combat so lets pretend I have just one token copy and the normal Wulfgar. If I then attack with Predator Ooze, it's ability would only trigger one additional time so it would get three +1/+1 counters, right? Or does Wulfgar of Icewind Dale's ability also affect copies of himself?

Totally agree with you on the Forgotten Realms set. Karazikar, Vengeful Ancestor, and even Wulfgar of Icewind Dale could be fed into the Thantis engine for what she does best. The combinations I saw with it is actually why I wanted to focus on her for my return to big playgroups and getting back to the US in general.

Wulfgar of Icewind Dale doesn't help any card except Klauth. I never liked Outpost Siege much.

RambIe on Could I get help with â¦

TypicalTimmy here are my orginal thoughts of Wulfgar of Icewind Dale as a general.
You can have it or maybe use it to help build Naya
Base:
(32) Lands
Early Game: Target Turns 1&2, Max CMC 2, But Lower Is Better.
(15)Cards That Ramp. Example:Sol Ring
Mid Game: Target Turns 3&4, Max CMC 4, But Lower Is Better.
(10)Cards That Fetch Lands. Example:Sword of the Animist
(10)Cards That Draw. Example:Werewolf Pack Leader
Late Game: Target Turns 5+, No Max CMC, But Lower Is Still Better.
(7)Cards With When This Creature Attacks It Gets Bigger. Example:Pathbreaker Ibex
(7)Cards with double Creatures Power. Example:Xenagos, God of Revels
(7)Cards that give addition combat. Example:Scourge of the Throne
Side Board: (Commander has no side board but i keep 12 cards in the deck to target meta)
(3)Cards That double triggers "Wulfgar fits here" Example:Strionic Resonator
(3)Cards Unassigned
(3)Cards Unassigned
(3)Cards Unassigned
What functions you add to the side board really depends on what your play group comes up with to stop your deck.
Base Suggested Functions: Grave yard Recursion, Damage Cant Be Prevented, Destroy Artifact/enchantment