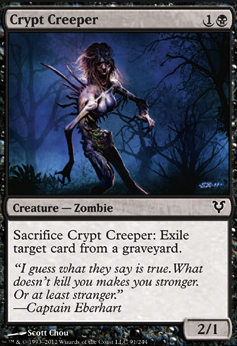 Sacrifice Crypt Creeper: Remove target card in a graveyard from the game. 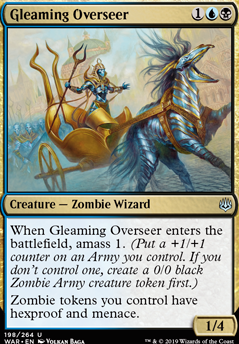 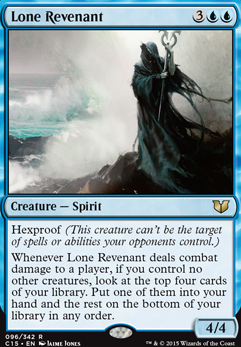 Death by Knowledge
by GrandpasMagic

For zombies: Prized Amalgam, Shepherd of Rot, maybe a Siren of the Silent Song for some discard stax, Withered Wretch/Crypt Creeper for additional gy hate , Cryptbreaker, Lich Lord of Unx , Lord of the Accursed, Vesper Ghoul

Funny you mention Cryptbreaker. When I first saw the card I actually wanted to build this with it in here. But I don't have any, so when I went to build this I thought the name was 2 words, and couldn't find it. What I did find was Crypt Creeper, and couldn't understand why I didn't like the card anymore. LOL

Thanks! Perhaps I'll work it into the next build, I don't have any, so give me some time.

Go forth, and conquer!

Trtl, after considering that someone could just Clone/Reanimate my Vampire Hexmage to Hero's Downfall my commander, it could be more of a liability than an asset. To a lesser extent, Crypt Creeper could prove to be used similarly against my strategy, so I don't think I need a second Heap Doll.

I recommend keeping Vampire Hexmage to stop Simic decks and other planeswalkers dead in their tracks (if they are common in your meta, otherwise ignore this message). I agree the combo isn't likely enough and you should see about dropping Crypt Creeper for Bloodthrone Vampire at the least.

Getting the winning loop of Liliana, Heretical Healer  Flip's emblem plus Gray Merchant of Asphodel/Kokusho, the Evening Star plus a sac outlet has been happening much too infrequently for my tastes.

Would replacing Vampire Hexmage and Crypt Creeper with Bloodthrone Vampire and Dross Hopper be a poor direction?

Thanks for commenting on the deck! I knew you could offer tons of advice :D

The nice thing about Blood Pet, Crypt Creeper, and all the other selfsacrificers is that they give Liliana, Defiant Necromancer a -2, a -1, or even a 0 of "Each opponent sacrifices a creature," when I have Grave Pact, Butcher of Malakir, or Dictate of Erebos out. Even though Slum Reaper can do that at -4 and Merciless Executioner and Fleshbag Marauder can do that at -3 without those extra cards, they can't flip Lili the turn she is played as early as possible, and I think that an extra turn is pretty important.

Do you think I need more graveyard hate? I like how Heap Doll, Crypt Creeper, and Nezumi Graverobber can function as oppressive graveyard hate, but theyre still good cards without having to go against a graveyard-based strategy, which I feel like is Withered Wretch's biggest downside: it becomes a dead card against decks that don't do much from the graveyard.

Extinguish All Hope is a bit of a sad card, but it's one of the few boardwipes below seven mana that isn't more than five tix (which is why I am not playing Toxic Deluge, Damnation, Oblivion Stone, etc.). It's not very efficient, but desperate times calls for desperate measures. Also, are board wipes that ignore me really worth waiting until that high mana cost can be paid? I would figure a reanimator deck could handle getting wiped.

I'll make a test version with the following changes and let you know how it goes:

Blood Pet, Crypt Creeper, and Extinguish All Hope out for Slum Reaper, Withered Wretch, and In Garruk's Wake. I look forward to your feedback!

In both decks, I'm actually taking out Phyrexian Denouncer for Coretapper because I don't like waiting to sacrifice. Sometimes waiting one more turn is the difference between a win and a loss.

Blood Pet only serves to flip Lili, that 1 for 1 isn't advancing your state. Even in a reanimator shell returning it seems lackluster. I prefer Slum Reaperand co. for flipping Lili.

I see that Crypt Creeper flips Lili, but I'd test Withered Wretch in its place. It's superior grave hate, but inferior sac fodder.

Extinguish All Hope is an expert wrath that doesn't give you any advantage. I'd swap it for either Toxic Deluge or Plague Wind\In Garruk's Wake.

I whole heartedly approve of Deadly Tempest. I'll have to pick one up for my lili. Which, has turned into a more reanimator deck.

Hope I helped. I may return and offter more help later.