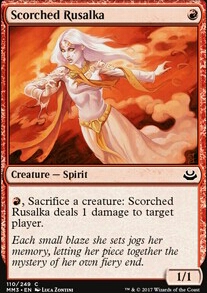 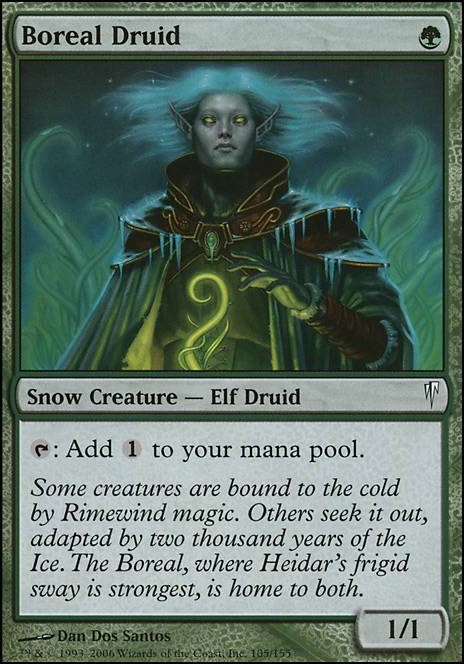 Maybe one could abuse Persist creature more with cards like Ashnod's Altar , Betrothed of Fire , Scorched Rusalka . Then also Mogg Raider goes infinite with Scuzzback Marauders, as well as Skirk Prospector . But thats tough because there is only these two persist creatures you have already included if Im right :(

Some of the mechanics of this deck different than typical Burn, Pyromancer, Storm, Goblin, or Hollow One decks. In 8-Flame you want to increase the number of damage triggers on a specific turn while you benefit from +2 damage and double damage modifiers.

I'd like to clarify the use of several cards for StopShot and anyone else who's been wondering about card choices.

Regarding Monastery Swiftspear and prowess triggers, there are actually 14 noncreature spells and an additional 20 lands that can be used as "retrace" targets of the noncreature spell Flame Jab. That means more than half the cards in the deck can trigger prowess!

The graveyard card sources for Grim Lavamancer include the 8 self-sacrificing creatures Spark Elemental and Keldon Marauders as well as the 8 Flame enchantments, the 4 Flame Jabs (only one Flame Jab needs to remain in the graveyard for âRetraceâ) and some of the 20 "Retraced" Mountain cards. The Scorched Rusalkas can sacrifice your other creatures on demand. Most of the deck and go to the graveyard and fuel the two Grim Lavamancers!

Having cleared up reasons for card choices, I do appreciate your advice. Goblin Guide, Fanatical Firebrand, and Goblin Grenade are attractive options. I may try them later in a goblin variant of the 8-Flame deck!

Hmmm, given noncreature spells don't even make up a quarter of your deck I doubt you are getting much advantage using Monastery Swiftspear's prowess ability. I'd recommend cutting it for Goblin Guide or Fanatical Firebrand.

Impact Tremors is only really good if you're spamming tokens or using something like Norin the Wary. Once in top-deck mode you'll only be playing one creature for turn if you're not drawing lands or non-creature spells. I would run Curse of the Pierced Heart over it, because it's much more consistent and deals damage practically the turn it comes into play.

Grim Lavamancer is only really good if you find it easy filling up your graveyard. Most burn decks run a bunch of burn spells and fetch-lands to fill up the yard so that they always have fuel to burn. Yours lacks this and you definitely don't want to exile a flame jab if you can help it. There are some discard effects, but I don't think it would sustain a lavamancer for enough turns that you'd want it to. Maybe consider Flameblade Adept, but more discard effects would probably be preferable for it too.

Scorched Rusalka is kind of dinky. I understand sacking the Marauders and Elemental for value does seem good, but for 1 damage doesn't feel like that good of a deal. I think Hellspark Elemental would end up dealing far more damage for you.

The same concerns came up when testing began on this idea. They are valid concerns lagotripha. It is difficult and counterintuitive to let go of the classic burn staples. Could the retrace effect of Flame Jab make up for the higher damage of Lightning Bolt? The simple answer is yes. These "ping damage" cards improve the deck.

If all this sounds unbelievable, please playtest the deck a few times. Usually lethal damage occurs between turns 4-6. The math allows about 10-100 damage dealt!

Darth_Savage, thanks for the suggestions!

I don't see how I can run Lingering Souls very effectively, unfortunately. Dragon Fodder is worth considering, for sure, especially if I'm going to capitalize on sacrifice payout. Smallpox fits more of a dedicated control or 8-rack, I think. I don't really want to be sacking lands when I'm trying to ramp into MoC. I think in place of Scorched Rusalka, I'll use Captain's Claws for that last point of damage, and add in Gut Shot. Rusalka looks powerful but I fear I won't have a whole lot of creatures at any given time. I like Infernal Plunge and will add it if I add Dragon Fodder. Another ramp idea that came to me was Generator Servant.

For the unblockability, I like Glaring Spotlight and Whispersilk Cloak the most. Thanks for those suggestions.

Lastly, my kill spell of choice within my play group is Go for the Throat but this is easily changed to fit your own group's style. Personally I don't run into Artifact Creatures nearly often enough for it to disappoint me.

I have a few card suggestions; Scorched Rusalka, Smallpox, Infernal Plunge, Dragon Fodder and Lingering Souls. My reasoning Master of Cruelties cost 5 mana so some ramp from Infernal Plunge would help get it out quicker, it also provides a sacrifice outlet. In terms of sacrifice, what is better than tokens, so Dragon Fodder and Lingering Souls would be obvious options. Last we have Smallpox which is just plain brutal and Scorched Rusalka which lets you deliver the last point of damage to your opponent or works as a sacrifice outlet.

Another issue you may have is getting Master of Cruelties to connect, to that end; Glaring Spotlight, Prowler's Helm, Trailblazer's Boots or the classic Whispersilk Cloak.

I'm not a great fan of Go for the Throat not hitting artifact creatures is a big limitation, thanks to Vault Skirge Hollow One and Signal Pest in particular, though not exclusively. I'd prefer Tragic Slip, Victim of Night, Murderous Cut or Smother. I would suggest Fatal Push but it may be over budget.