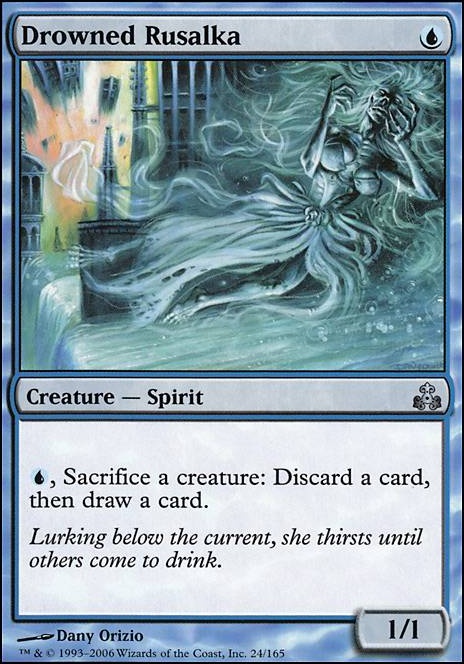 (Blue), Sacrifice a creature: Discard a card, then draw a card.

Awesome take on this deck!

I see that the Locus god is fairly new at the head of this deck, but looking at what you have here I find myself wanting to take more advantage of his specific abilities.

Have you considered Drowned Rusalka , Carnage Altar or other effects of that sort? You can turn the tokens into mana - why not cards? And the Rusalka goes infinite with Alhammarret's Archive and Phyrexian Altar

The deck seems super blue heavy, and I think lacks some of the power red could offer. I especially note the lack of Past in Flames

Was the previous general Niv-Mizzet, Dracogenius ? Where is he?

If you're going to play Protean Hulk, I would highly recommend playing either Starved Rusalka or Drowned Rusalka. It lets you Flash hulk into rusalka + Karmic Guide, bringing back hulk and providing a sac outlet for him so you can do something like fetch Saffi Eriksdotter+ Trophy Mage who in turn gets Blasting Station. Outside ofthat, it just provides value which is only ok, but having it provide a direct line to your win condition (albeit requiring additional mana) makes it much better.

In just , I can think of Viscera Seer, Drowned Rusalka, Sidisi's Faithful, Bloodthrone Vampire, Nantuko Husk, Kalitas, Traitor of Ghet, and Bontu the Glorified. if you want to splash red, then Greater Gargadon, and Insolent Neonate are also very good. I also might suggest you take a lot at Rally the Ancestors decks. They might be right up your alley. They often abuse casting rally on your opponent's turn to block their creatures, and then sacrifice all of the creatures to prevent the exile clause -- often times doing a lot of damage in the process with Blood Artist and Zulaport Cutthroat.

Chino90 Hi and thanks for the comment! Regarding your suggestions, i think you missred the comboes part, since Cryptolith Rite is an important piece of many comboes and so it is Drowned Rusalka. Electrolyze is a very nice card, but since i'm not counting on instants and sorceryes damage to end my opponent, i think that Lightning Bolt as a removal is just better, even if it doesn't draw me any card. Finally, adding Curiosity and Niv-Mizzet, the Firemind combo (while it is one of my favorite combo) i think would end greatly slowing the deck down, while providing only one singular combo. Btw there are plenty of EDH decks that revolve around Niv and Locust god, you may like them :). Anyway i will take into consideration all of your suggestions, thanks again for your time .

Insolent Neonate is not better here than Drowned Rusalka since only the Rusalka can combo off with Cryptolith Rite. Birds of Paradise may be better than Judge's Familiar though.

I would cut cryptolith rite for some Sakura-Tribe Elder. Cut Drowned Rusalka for some Birds of Paradise.

Insolent Neonate is better than the rusalka

Electrolyze seems nice for your deck.

Chasm Skulker is a nice card that benefits from drawing.

Curiosity + Niv-Mizzet, the Firemind could be a secondary wincon.

Whoops keep forgetting the text on those invocations.