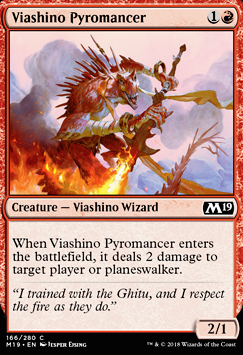 When Viashino Pyromancer enters the battlefield, it deals 2 damage to target player or planeswalker.

Viashino Pyromancer occurrence in decks from the last year 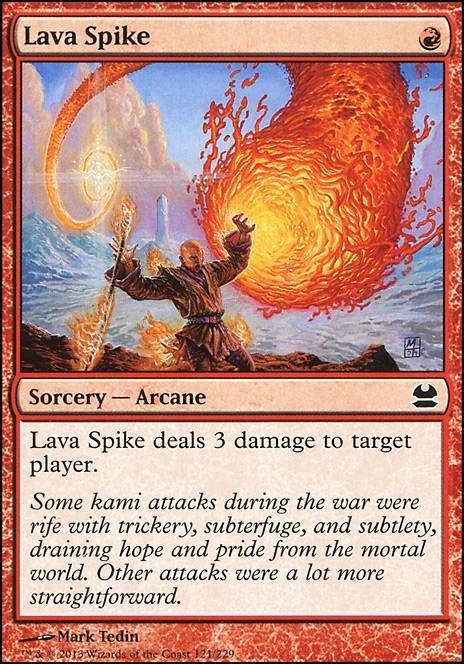 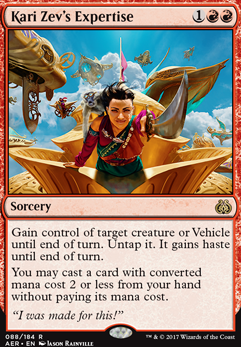 Mistress Judith and the Rakdos Club
by holker

This should be your side deck

3x Chained to the Rocks

If you really really really want the Titan's Strength then splash green in your mana base and run 4 Atarka's Command instead, which I strongly advise against actually doing.

Keep the 2 Ramunap Ruins. They are a good card for added reach in the late game. Honestly consider Runaway Steam-Kin in the main deck at 4. It is incredible with Light Up the Stage. Viashino Pyromancer is also a good card since it is a guaranteed 2 damage when it enters the battlefield. Overall you want to keep the mana curve low and the deck as aggressive as possible so Haste or some amount of value on entering the battlefield is what you want to look for. On that note I am not a personal fan of the Soul-Scar Mage. Dropping Soul-Scar Mage for Runaway Steam-Kin is the direction I would go.

Is Viashino Pyromancer really good enough to be here? I think you can use Monastery Swiftspear .

I just get the feeling that Sword-Point Diplomacy or Risk Factor would do more for this deck than Experimental Frenzy . I like the idea of doing some direct damage to put +1/+1 counters on Knight of the Ebon Legion , but you might need a few chump-blockers early in the game. Maybe Bladebrand in place of Light Up the Stage to both reduce your mana-curve and let Viashino Pyromancer also clear out an opponent's creature. I also like Sorin, Imperious Bloodlord over Chandra, Fire Artisan

I'm not sure if this works, but couldn't you have Mirage Mirror or Mirror of the Forebears copy your commander, sac the copy to the legend rule, and then since either mirror is no longer your commander in the graveyard it won't exile itself, but the ability will still bring it back to the battlefield?

Nim Deathmantle is a strong potential combo piece to consider. If you don't have Loyal Retainers you can still win the game with your commander, Nim Deathmantle , Ashnod's Altar & any creature like Viashino Pyromancer . This route can be very consistent when you consider cards like Stoneforge Mystic , Steelshaper's Gift , and Open the Armory can tutor up this equipment card.

Thank you wallisface once again for the great input. : ) I definitely see what you mean and have swapped around some cards accordingly as per your recommendations.

I do have another question though, do you think that Corpse Knight would be a good replacement or would something more along the lines of Viashino Pyromancer would be more appropriate? I went with Corpse Knight as the redundancy seemed nice and because the deck isn't necessarily going for quick damage, the extra damage over time looked like it'd be good to have. However, blinking Viashino wouldn't necessarily be a bad approach either. Or, do you think something else entirely would help more?

It feels like youâve built 2 different decks and kindof fused them into one here.

Stuff like Impact Tremors encourages fast play by just swamping the board in as many creature tokens (usually gobbos) as you can, ending the game really quickly.

Lumbering Battlement typically wants to be in a slow controlly deck alongside things like Siege Rhino where you can just slowly grind down your opponent and prevent them being able to kill you.

So my advise would be to decide what you want here. And perhaps that means 2 decks, instead of 1.

If youâre going with quick damage, as Impact Tremors and Viashino Pyromancer suggest, then you just want to be hitting hard and fast. Lots of spells that make tokens, and then creatures that can buff em and win quickly. Nothing over 3cmc.

If youâre going with blinking creatures and gradual board advantage where the opponent is rendered helpless, iâd suggest going down the WBG colour route. Stuff like Siege Rhino , Satyr Wayfinder , Unburial Rites , and a decent amount of killspells, plus Lingering Souls to get you safely into the late game