Whenever an equipped creature you control attacks, you draw a card and you lose 1 life.

Equipment you control have equip Knight . 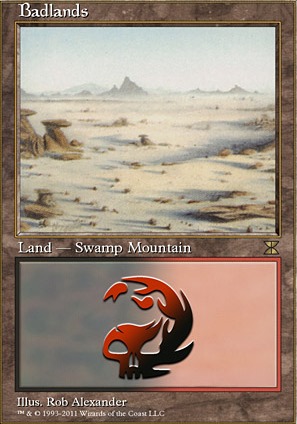 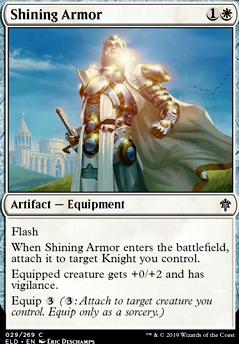 seems very equipment focused. Syr Gwyn, Hero of Ashvale may serve as a better commander. Demonic Tutor, Open the Armory and Enlightened Tutor would also help; though if yo're not a fan of tutors that's understandable. Solid start dont sell yourself short +1.

Epicurus, yes I was talking about EDH. And absolutely Puresteel Paladin would be in the deck, as would other powerful cards such as Brass Squire, Auriok Steelshaper, Stoneforge Mystic and others.

By being in Boros, it gives you access to Sunforger and Embercleave as well, not to mention Hellkite Tyrant. Slap some Lightning Greaves on him and win.

Blue is one of, if not the, strongest color for artifacts. The old school "artifacts matter" colors were Esper but there has been a push in recent years to go Izzet.

Personally, I'm not a big fan of blue. Absolutely nothing wrong with the color, it's just not my play style. I love to go big and attack. Now, Boros doesn't go big but it does go wide. Boros also loves some nasty combat tricks.

Telling me to "make this guy better than (Puresteel)" isn't really a valid point, because if I did and made equip costs users would be in here telling me how broken and shit it is. If you want to make something better than Puresteel, slap Legendary on Puresteel and call it a day.

The truth is, no card is perfect. No card is truly balanced. There is always improvements to be made. No one player is always going to be happy with whatever is presented.

Just because you don't like it means absolutely nothing.

Besides, we already have something "better" anyway - Syr Gwyn, Hero of Ashvale. So if anything, you need to compare my card to her, not Puresteel.

EDIT: Sorry if it came off rude and aggressive. I'm really tired and, after re-reading it I recognize that the tone is a bit more stern then I wanted. I'm not trying to be mean - I'm just lacking filters right now.

Commander: Syr Gwyn, Hero of Ashvale (this horse is as smart as a very smart horse, he is not anthropomorphic, i just need him to be a knight)

Companion - Each creature card in your starting deck is a Knight.

Whenever you equip a Knight, you draw a card. Whenever an equipped Knight you control attacks, you gain 1 life.

SirChris39 thank you so much for the support, my Balan, wandering knight deck is the physical list that I currently own (that's why it's not 100% optimized). She's actually a really good mono-white commander that even if you can see it coming, there's often no stopping her. I love how artifacts can almost completely make up for the short falls of white. I actually keep a side board of cards handy so I can change commanders and strategies between games, so when I pull that deck out you never know what to expect. Again thank you for your support, I plan on expanding my list greatly once all the turmoil settles down. If you have any thoughts or suggestions I'm always open to input. Balan is a wonderful commander who is one of the best Volton commanders in mono white. Fully optimized it wins turn 4-6 with the set up I have now it's more like 6-8. Still, the look on people's faces when Balan swings in the first time and dethrones the strongest player is priceless. Balan is also great because she can react to instant speed removal as long as I have the right equipment, and I usually do. My favorite white commanders: Kemba, Kha Regent make an unstoppable army that makes her unstoppable, Sram, Senior Edificer play 0 cost equipment and draw way more cards than anyone else in mono-white, Balan, Wandering Knight hardest hitting Volton commander who lets you cheat equip costs (because whowould think that's a thing. I'm actually curious about Syr Gwyn, Hero of Ashvale so I can use Embercleave and a little knight tribal.

I have a similar knight deck that is Standard legal. If you like flying a nice add with some added control is Ardenvale Tactician. I'm debating removing Order for same reason as you, as well as thinking of replace the 2x Acclaimed Contender as they are a little slower and lower impact that I was originally hoping. Some other good adds to look at would be Stormfist Crusader for added card draw (I often find myself with no cards in hand due to the speed of the deck) and Wintermoor Commander for the added Indestructible ability. Good combo is running Blacklance Paragon + Fervent Champion . Also using Syr Gwyn, Hero of Ashvale with various equipment cards makes for good buffing mechanics and helps recover from opponent creature destruction/control. Food for thought!!

Hey, just wanted to say thanks for your feedback - hadn't checked in for a couple of days.

Honestly, think although Sunforger is a great card and with Syr Gwyn, Hero of Ashvale even moreso, the building towards more instants to get value out of it (although undoubtedly more competitively viable) means I have to sacrifice too many of the cards I want to play with (whether that be knights, equipment pieces to bling them out with or ramp to get all the toys on the board). It's a personal choice, and likely not the right one to win games, but it is what it is. The Mistveil Plains interaction is super cool though, hadn't heard of that before.

However, two of your suggestions I think are really good considerations and I'll definitely be looking to see if can find space for, these are Steelshaper's Gift and Weathered Wayfarer. Really not sure how I missed Steelshaper's Gift in the first place! Its a perfect fit, even if its just to grab something like Sword of the Animist early. Weathered Wayfarer looks as though it would be great too, in my only games with the deck I have fallen behind on lands very quickly (but still done fair with artifact ramp).

I dropped a comment on your deck as well, hope you get more feedback on it from folk's with more insight and game experience - it's sweet, just so very different from my own image for the Syr Gwyn build!

Firstly thank you for your comments, greatly appreciate the feedback.

Had the chance to actually play 3 games with the deck, although unfortunately they were all 1v1 which is really not what I really wanted to start playing commander for. Alas, it is what it is. They also made for really poor test games as I unfortunately was caught by Blood Moon from a Krenko, Mob Boss very early two games in a row and on the third game (against a different player) he didn't play any creatures (just destroy X and counter-spells) and fell very slowly to Leonin Shikari, Acclaimed Contender & Varchild, Betrayer of Kjeldor.

In that final game though definitely felt the lack of a ramp as still did not get close to the mana for Syr Gwyn, Hero of Ashvale. The Talismans and the Chromatic Lantern also look like good calls. Had thought about the talismans before and opting to try without them first. However had not really looked into draw cards beyond what I included before and you listed a lot of great options, I'll need to adjust the list and see where I can slot some of them in.

Had a look through your list and props for managing not to include every cool knight spot during deck-building. Guess smarter deck-building largely comes down to experience, but will get there yet. Will try and draw the line in the middle somewhere.

Thanks for your help!