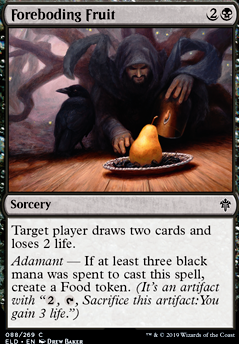 Adamant â If at least three black mana was spent to cast this spell, create a Food token. (It's an artifact with ", , Sacrifice this artifact: You gain 3 life.")

Foreboding Fruit occurrence in decks from the last year

Calling in Favour
by TauralCW

Not even garlic can save you now.

So, even with Vitos ability Dark Confidant seems like a bad fit for this deck. With 12 cards with 5+ cmc you could be in for a big slap in face every upkeep. Additionally, you have some underwhelming cards like Tavern Swindler and Foreboding Fruit. Marauding Blight-Priest and perhaps Nullpriest of Oblivion would serve you better.

Treacherous Blessing >>> Foreboding Fruit if no Phyrexian Arena is available.

K'rrik, Son of Yawgmoth maybe instead of Bolas's Citadel?

I've been scrimming against this deck a bunch to better understand it. It is insanely fast, but it burns through cards like a motherlicker.

I was bored and the deck is fun to play so I crunched some numbers on it. The biggest downside is that on a good hand it will average 10.1 cards played by turn 4.

Note that by a "good hand" I mean one that has at least 2 land, 1 Dark ritual and a 3CMC card on the play.

It should be noted that by the end of Turn 4 the player generally has 1 or 0 cards left in hand. From this it is clear that turn 4 is where this deck starts to run out of gas. This is fine in 1v1s because by this point you've hit them so hard you'll definitely have the advantage regardless (unless they board wipe).

2v2 generally drags on a bit longer; to keep the deck from running out of gas extra card draw must be generated by turn 4 (prefereably Turn 3). I've changed Black Deathtouch Assister to contain both Foreboding Fruit and Howling Mine. This gives a 48.8% chance that Howling mine will be out by the start of turn 3 and a 79% that I'll be able to generate 1 or more cards drawn by turn 3 by this deck.

Due to high card play this deck does get hurt by exiles, direct damage and creature destruction. The constant extra card draw doubles up as a recovery from removal.

Not bad, although I think it can be improved. Turn 6-7 seems to be the average win with no opponent, which isn't fantastic but it's good. You lack interaction with pretty much any tier 1 deck in the format, since all you have are killspells. Also, you have some pretty under-powered cards ( Foreboding Fruit , Witch's Cottage ). To fix this, maindeck Covetous Urge , take out Foreboding Fruit , Witch's Cottage , and maybe Cavalier of Night , find some graveyard hate that works with your deck (I'd recommend Cry of the Carnarium , but it hurts you pretty bad too), and put something in your two-drop slot, since most of the time you don't have anything to do with that turn. You might consider adding some Blood Crypt s just for when you maindeck Bedeck / Bedazzle and want to cast the other half.

You'll still be weak against flash, but that's the best I have. It's a good deck, just not in this meta.

Whoops to my last comment about Blood for Bones . It is a great card.

Foreboding Fruit is simply another option for card draw.

Also, while I am at it, another 4 drop to consider that would fit the curve, could be Wicked Wolf which I believe has a fair and cheap price with good utility.

Lastly you could think about using Bog Naughty as another way to get damage through the air and kill your opponents creatures by throwing your food.

Sorry about the mix up with last comment. I hope you have fun with the deck! +1