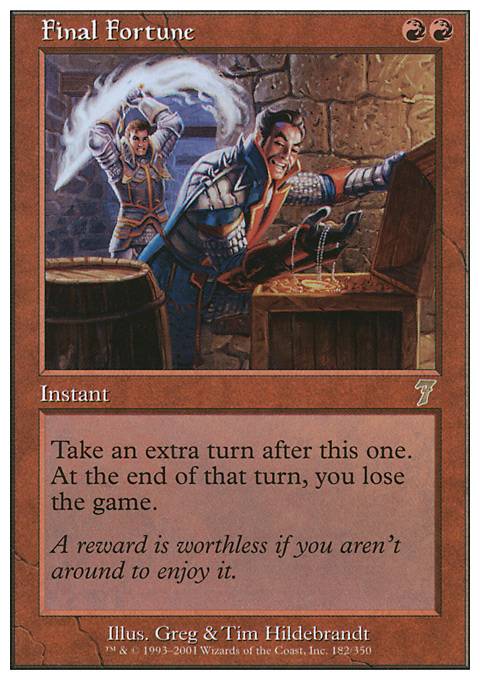 Take an extra turn after this one. At the end of that turn, you lose the game. 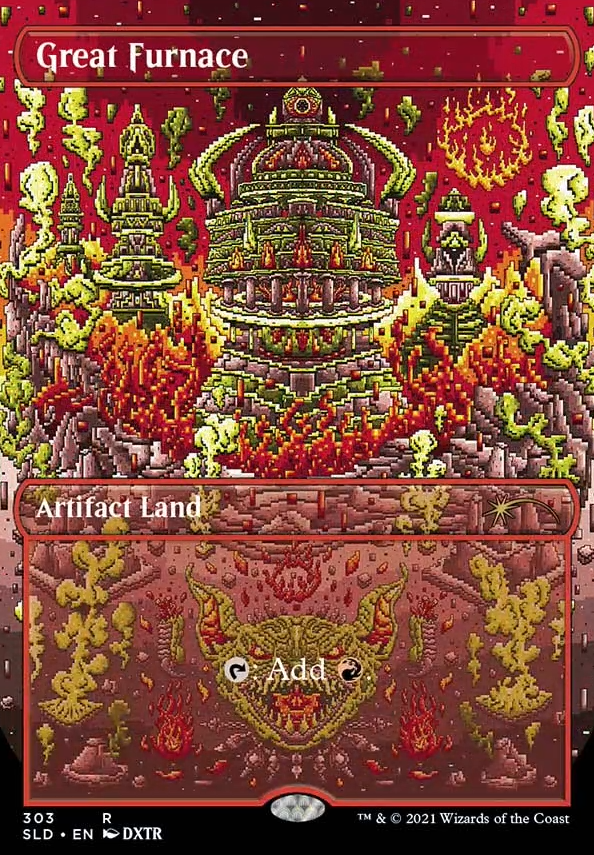 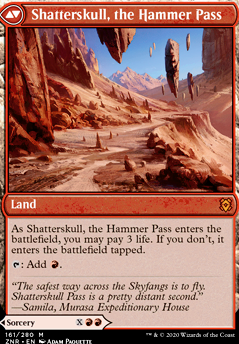 Polaris on Flashback and extra turns.

However, a trigger to make you lose the game will go on the stack at the end of any extra turn created by Final Fortune. Regardless of how you flash it back, you need some way to survive the end of the first extra turn (like Platinum Angel, Stifle, or Sundial of the Infinite) to get any benefit from the second.

TH3CACKL3R on Flashback and extra turns.

I have a question about the interactions between cards that give flashback, example Past in Flames, and extra turn cards, ex Final Fortune. If I flashback Fortune the same turn its cast do I get 2 turns? Or just the one? If I was the flashback Fortune on my "extra turn" does that give me an additional turn after that before I lose? Forgive bad formatting. I'm on mobile.

Maybe try Sudden Substitution. You can cast it targeting your Glorious End and an opponents creature to give them their last turn. Also that kinda works with Alchemist's Gambit, Last Chance, Warrior's Oath and Final Fortune if they cant win with the extra turn.

In all honesty while I love these piles, I do think two commanders here are overrated. Yiddish, which while being a great storm commander simply casting it and connecting is hard enough now and we have good enough storm to go off in those colors without it at all, making it much worse than it used to be. Cards like Jeska's Will and Peer into the Abyss have been released and shown its just easier to run a pile like Kenrith, Codie, or Thrasios/Smasher for storm and I don't think Yidris is a relevant threat in the highest of competitive tables like it used to be.

Similarly, despite my love for Sidisi Food Chain/Hermit Druid piles, it sadly isn't a commander that has the legs that lists like Gitrog, Krark/Sakashima and other more focused decks I just don't see it where it used to be.

Also Sythis seems to be a tier lower than I'd expect, and I haven't seen more than one obeka list and it just seemed like a strange turns style deck based around trying to get a Final Fortune on an Isochron Scepter/Elite Arcanist is this the same list mentioned here? It ran the other sorcery turn spells of the same style and had snapcaster and friends to try and go infinite turns but felt too gimmicky for me.

Other Note: Rakdos morph, I Love It!!!
Rakdos, Lord of Riots + Experimental Frenzy could play like Animar, Soul of Elements except you get access to cards like Gift of Doom, Grim Haruspex, Soul Collector
digging deep with Necropotence then casting Final Fortune could be game ending
let me know how this deck goes
p.s. nether of these cards would benefit you lens only effects permanents which means only cards already on the field, Mycosynth Lattice & Chromatic Orrery would be better options

It might be too unreliable but I love Puppet's Verdict as a unique sweeper. Its low CMC and instant speed has got me out of some tight jams too. Final Fortune also seems like a cool include if you want to go down a all-in (with a high chance of self-destruction) theme