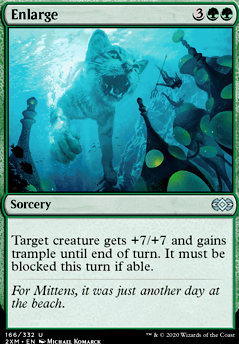 Target creature gets +7/+7 and gains trample until end of turn. It must be blocked this turn if able. (If a creature with trample would assign enough damage to its blockers to destroy them, you may have it assign the rest of its damage to defending player or planeswalker.)

Enlarge occurrence in decks from the last year 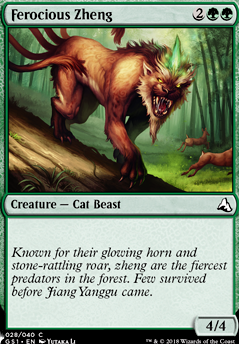 Hey, fair enough! To each their own. I apologize if Iâm leaving too much of my own subjective view on your deck page, but Iâm always interested to hear why people have certain cards and maybe why they donât care for my suggestions. It can be hard sometimes since metas can be so very different.

Your logic against instant-pumps is absolutely correct, I just have a completely different experience in multiplayer (piloting this deck since 2013), and 1v1 is an entirely different story (he is usually too fast and evasive). People always seem to flail against combat tricks, combined with the fact skullbriar is naturally fast. The way I see it is the pump spells are essentially an extra investment into Skullbriarâs counter placement; extra evasion, extra strength; adds extra synergy (w/ Skullbriar). Iâm just putting all my eggs in one basket. Would it be better to reuse these spells? Absolutely. But thatâs also why I have a bunch of them. Iâm also going for affect; how I can take someone out with Enlarge + Might of Oaks with Hot Soup âitâs hilarious!

My point with the reanimation that you were confused about was just how it can avoid commander tax, which is overall a great thing.

Anyway, sorry again if I havent been much help. Itâs always cool to see someone elseâs deck-list. If you want to continue this conversation we donât have to keep writing on your page. If you want we can discuss via wall comments if youâd like.

Quickly, based on your update from this morning: I think you should put in Inspiring Call and Rishkar's Expertise . Both seem like insane draw for this deck. Iâm definitely going to add both of these to mine! I agree with all the changes you made tooâlove the Collector Ouphe add. Also, my 2 cents: use Fireshrieker over Inquisitor's Flail .

I might suggest adding in Cultivate (which is definitely budget friendly) and even Kodama's Reach (which can also be budget friendly, depending on printing)).

Blossoming Defense helps add some more damage and save creatures using hexproof, which might help.

For even better damage, and for making use of your graveyard (which I believe is currently an unused zone in this deck), you could also try Become Immense. I also like Become Immense in this deck when you have Rashmi on the field: draining your yard, casting BI for a measly 1 G, hitting something like Enlarge off the top for free is essentially game over. Granted, that's pretty "pie in the sky," but you could still get a lot of interesting plays off of Rashmi/Become.