Until end of turn, target creature you control becomes a 4/4 blue and red Dragon, loses all abilities, and gains flying.

Overload {3}{U}{U}{R}{R} (You may cast this spell for its overload cost. If you do, change its text by replacing all instances of "target" with "each.")

America to silence you all
by jcizadlo

I am reanimating this deck and made some changes. I swapped Last Thoughts with Trait Doctoring. So instead of that low 4 mana spell i have a quick "cipher one drop" that can also fix my mana base.

dropped the two Niv-Mizzets, because they weren't a real finisher after all. i added Sentinel Tower and Firemind's Research instead which support my overall cipher theme better.

Dragonshift for some (defensive or offensive) suprises, Mizzium Mortars for some boardwipes.

Thanks! Actually I have wanted to build a Dragonshift Deck before, but forgot about it lol. Zirda IS a ton of fun and currently running in 2 of my decks right now, particularly with cycling. Thanks for the list; I'm sure I'll refer to it when I'm looking for something. Off to work on a Dragonshift deck and check out some from FormOverFunction

Ekuryua on Looking for a fun budget â¦

I think there is a lot of fun to be had with Zirda, the Dawnwaker, there are a lot of cards that are affected by his ability.

Also maybe something with the processor cards from BFZ? Cryptic Cruiser and the likes.

I hate being that kinda guy, but maybe you want to look at this list i made some time ago listing older cards with interesting or unique effects that go mostly unnoticed: List of Interesting cards some may have forgotten

I had this idea for a deck where I constantly cast Frogify effects on my opponents whilst casting similarly weak creatures myself. But then what I wanted to do was transform them into dragons. I am purposely limiting myself to dragons for flavour but if there aren't many more cards that can do this, then I'll have to rethink my strategy - probably just hard cast dragons to stay on theme or just other big creature token generators.

So far in my list of cards that I've found are:

If there are any others people can think of, it would be HUGELY appreciated.

enpc do you have any win con ideas? Aside from the Niv/Draw/Lab Man combo I was thinking Dragonshift could have been one but the longer it has sat there it seems better suited to a go wide strategy or 1v1. I considered infect but seemed cheap. I have thought about Riku, being able to copy pokers and spells could be useful. Regarding Niv would you say run the one or both for redundancy?. Torbran seems like a nice touch, though I feel it'd be another portion to build around with damage doublers like Gratuitous Violence . Choosing one path (deathtouch/stealstuff) is difficult. Death touch focus would mean less dedication to removal spells and cool synergy with Goblin Sharpshooter . Steal stuff route would require alot of spots devoted to it I think, like sac outlets to use the stolen goods.

GhostChieftain while that does sound tempting I think that would further complicate things and increase costs. I had debated dropping green but it's giving me Ramp, haste enablers, untap effects, and a bit of recursion I can't get from just UR. 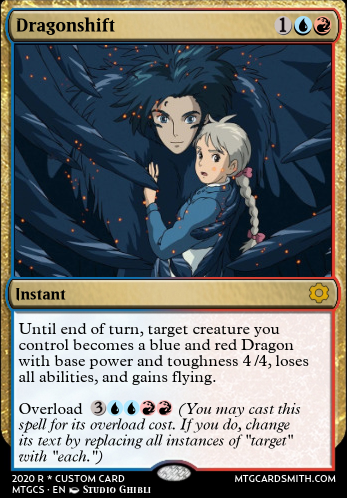