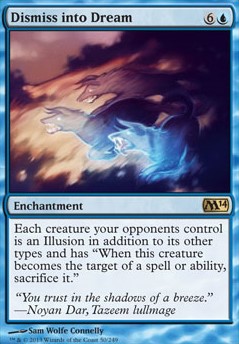 Each creature your opponents control is an Illusion in addition to its other types and has "When this creature becomes the target of a spell or ability, sacrifice it."

Dismiss into Dream occurrence in decks from the last year 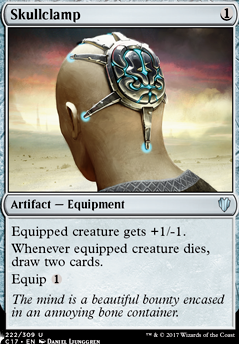 Derevi the Critter Master
by Wolfsbane706

Cloudius on Tim and his Pingers

Always have a soft spot for Pingers so here's my attempt at making a Casual Janky EDH deck, assembling a team of cute Pingers.

Here're some of the common issues of Pingers and how I attempt to play around them in the deck:

1) Pingers have relatively high CMC (often 3+ CMC) - This explains the choice of commander - Animar, Soul of Elements to help make the cost cheaper

Looking forward to any suggestions on how the deck can be enhanced. Thanks in advance!

Your first combo will only work for infinite colorless mana since lands don't untap with Dramatic Reversal . Swap Command Tower in the combo with something like Sky Diamond or Commander's Sphere if you want the blue mana.

Panharmonicon does not need to be in combo 3 since it only works on enter the battlefield triggers and not all ability triggers. You want something like Strionic Resonator to double the triggered ability and it will only happen once unless you have your dramatic scepter combo out.

Have you considered Ramses Overdark in case you don't draw Dismiss into Dream ?

One fun thing you can do with the bestow mechanic is turn them in to creature removal with Dismiss into Dream .

You can bestow an opponents creature, which cause it to be sacrificed. But rather then going to the graveyard the bestowed card turns into a creature and goes to your side of the field.

702.102d. As an Aura spell with bestow begins resolving, if its target is illegal, the effect making it an Aura spell ends. It continues resolving as a creature spell and will be put onto the battlefield under the control of the spell's controller.

The deck looks really neat has great flavor, which is my favorite thing about nicol bloas.

Biggest issue I see with the deck is hat you have a really high average cmc but not a whole lot of ramp. I'd recommend cutting any 4+ drops that your on the fence about to work in more ramp. The other signets in your color, Talisman of Dominance , and Talisman of Indulgence are good cheap options.

The biggest cuts i'd recommend would probly be Thousand-Year Storm (sweet card, but wont be able to do much in this deck), Consuming Aberration (not enough mill synergy to warrant him), Dismiss into Dream (really neat card, but too costly too slow of removal in this deck), Blatant Thievery (reluctantly, you got other steal effects, and this is costly with a lot of blue), and maybe ribbons of the night (just feels like it costs more than it should).

Since your deck has a lot of color devotion, you might also consider some cards that produce treasure tokens like Spell Swindle , Captain Lannery Storm , or maybe Tezzeret the Schemer .

I hope this was helpful, best of luck.