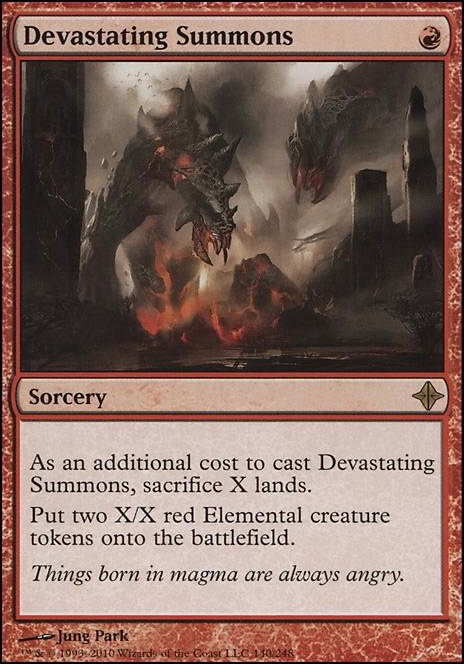 FODDER // The Power of Voodoo
by Holmhollow 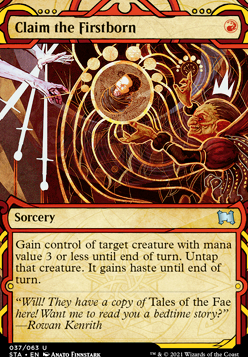 Destroy your Lands and your Enemy!
by blalwach 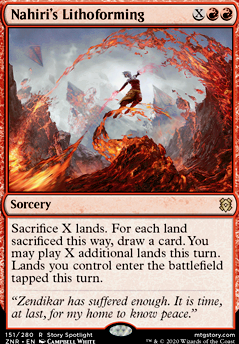 Your bush is mine to whack
by FlintSR

-1 Devastating Summons, +1 Nissa of Shadowed Boughs. Even with the synergy with Doubling Season, I feel like I'd have a better reason to sacrifice my lands than to Devastating Summons. A planeswalker with a landfall trigger to add loyalty is a dream for this deck, and by the time she got rolling, her minus ability can probably get any creature in the deck that's available. I can't wait to play with this card.

-1 Army Ants, +1 Ancient Greenwarden. I have plenty of land destruction options that are better than a once-per-turn, creature-facilitated option like Army Ants. I think I may have been including it for purely nostalgic options. Ancient Greenwarden, on the other hand... a 3rd crucible effect, and a land-Panharmonicon (landharmonicon?), both attached to a big body that can swat down fliers? Yes please! Either one of his abilities would be enough to include him, but both?! I've mentioned before that I love the possibility of exponential growth, and I'm excited to get this guy rolling with Doubling Season and watch the ensuing chaos. It's like this guy was made for this deck.

Yeah, I would say putting in the spirit guide is a bit risky. Either you hit your Emrakul a turn early, or you hit a 2/2 Ape instead. I would continue your search before considering that one.

Satyr's Cunning, Purphoros's Intervention and Devastating Summons Would work as 1 mana for a noncreature token creator

I agree, Meddling Mage is an enormous prob. Is Dismember in the sideboard gonna be enough?

That idea for Devastating Summons as a build-around is kinda cool, but I think that's its own deck (maybe alt wincon for Dryad-Valakut?).

Anything sorcery-speed is not a problem. My goal is to just blow up and win the turn after I play Reef. Anger of the Gods is tantamount to Lightning Bolt at sorcery speed against my deck.

Damping Sphere destroys me. Good thing nobody plays it right??

Ingot Chewer gets me the Risen Reef triggers. The spree does not. For the same reason, I am considering Shriekmaw over Dismember.

Anyhow, my goal is to be able to compete at an FNM. However, I have no FNM at which to compete, and all of my friends who play Magic were taught by me pretty recently. So yeah, altogether, not ideal.

Wow, you play yours quite different from mine, way more 0 cost creatures. Your Average CMC is so much lower than mine.. Nice.

couple cards i would recommend:

Devastating Summons - you have the option to not sac any mountains.. still get the 2 ETBs before they die

Temple Bell or even Endless Atlas - because of your low mana curve, draw should always be better for your than your opponents.

Valakut, the Molten Pinnacle - I usually use this to target an annoying creature on the board.

Spawning Pit - fairly new add for me, but won me the last game, so cant argue with its success .. lol, 1 for 1.