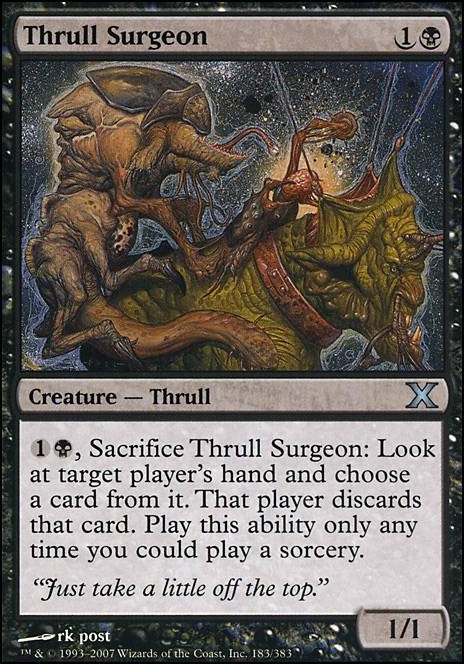 , Sacrifice Thrull Surgeon: Look at target player's hand and choose a card from it. That player discards that card. Activate this ability only any time you could play a sorcery. 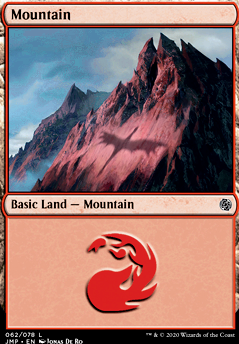 Oh Shit A Rat
by SpaceGopher76 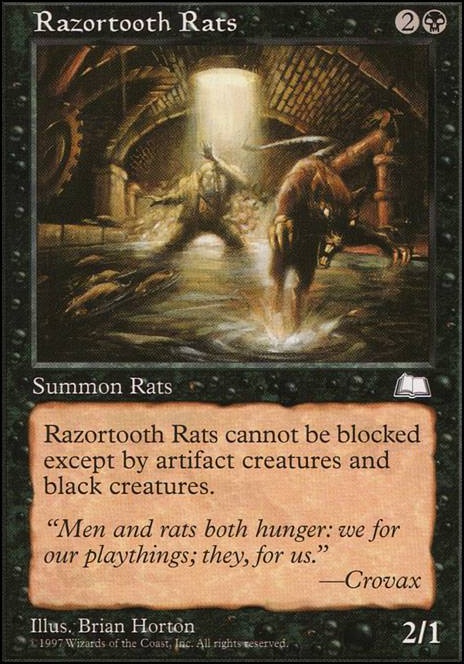 Hungry For Hands
by KatsuBen

You mentioned the deck's average CMC at 5.5....that's probably too high. If it were me, I'd work on having more 1 and 2 drops to smooth out the curve and make sure I can get things up and running more quickly. A card like Burnished Hart would work better for you than Patron of the Moon. Let's look at Patron real quick: nice ability on it, for sure, if you can really abuse it. But 7 CMC for to get an ability to then pay 1 for two tapped lands is NOT ramp. Fixing, maybe, but not ramp. I feel the same about Dreamscape Artist. 2 CMC to cast, which is a good early play, but then a 3-costed activated ability to sac a land and go get two lands.....its like a really bad way of playing Harrow.

Good creatures to include: Baleful Strix: draws you a card, and has deathtouch. Edict creatures, like Fleshbag Marauder, Plaguecrafter, Merciless Executioner, Ravenous Chupacabra, Nekrataal, Bone Shredder and Shriekmaw; the Maw is especially synergistic here with his evoke ability. Just one of these creatures cast could end up netting 3 to 4 sacrifices across the table. Even a card like Mulldrifter fits your theme. A few other cards that might interest you: Tortured Existence and/or Phyrexian Reclamation. They can help you get some of these cards that trigger your Commander's ability back into play or into your hand to re-cast (like Endrek Sahr, Master Breeder).

Thrilling Encore is ok, but adding one card to reuse that one card seems like a waste of two card slots. Archaeomancer and Mnemonic Wall could do it for you, though. You could consider running Deadeye Navigator as a way of blinking some of these creatures I've listed with ETB effects.

Two items left I want to hash out with you:

Item 1: Distended Mindbender. This is just not a good card, and there are plenty of sorcery speed discard spells that black runs that would do a better job, not cost 5 CMC, and will force some discard. Hell, I think Thrull Surgeon would be better, and you could recur him with some of the options I've listed.

Item 2: Lotus Bloom. Not good, in my opinion, especially when compared to other options, like Worn Powerstone, Mind Stone, or Commander's Sphere. You cast it for free essentially, but then have to wait three turns to essentially net a Dark Ritual effect. So you wait three turns for a one-off effect, then it goes to the graveyard. Worn Powerstone is repeatable after it untaps, although it is colorless. With Commander's Sphere you get ramp and fixing, and you can choose to send it to the graveyard in exchange for a card, replacing itself. Mind Stone replaces itself, too. I'd like Lotus Bloom more if you had a way to recur it, like Goblin Welder, but that isn't what your deck does, so it doesn't make sense with better options available.

I hope that helps explain my reasoning a little bit. I like to try to manage my mana curve as much as possible, so I have things going on early to set up mid and late game. Your Commander is high CMC as it is, so you've really got to build to getting him out as soon as you can; by turn 4 would be great, but probably not going to make an appearance consistently until around turns 5 or 6. Let me know what your experience with this is, though. When deck building, its easy to get wowed by big dumb creatures, but too much of it makes the deck clunky and inconsistent. Better to get the consistency that makes the deck function early, so you can play your game later on, too.

You are right about the Thrull Surgeon. I tend to play 2HG mostly, so I always try to find a way to strip my opponents hands of any counterspells. The biggest thing I like about the Thrull is that it can take lands too.

A reason to add Courier's Capsule would be to diversify the types in the graveyard. My list runs a lot of creatures I want to get back, so I place it being an artifact over a creature type. I guess it's up to anyone's fine tuning.

The Possessed Portal has one thing over the other lock pieces in where it prevents your opponents from finding an answer. The "each turn" and "each player" combination is especially though and requires an immediate answer, which means they need to have that in hand at that moment, or have a tutor effect available.

Traveler247, when I first started looking for cards to use with Muldrotha, the Gravetide I made the mistake of thinking certain cards could go "infinite", failing to realise you can only play one type each turn. Is your example subject to the same mistake or did you call it "infinite" for a different reason?

Hi, I have a couple of suggestions:

I absolutely love the deck. After seeing this I am now determined to make my own variation including some of the following suggestions. Btw this is so long because its also a note to myself.

Gattison on Help With Thrull Tribal

The best thrulls are WB, such as Mourning Thrull, Kingpin's Pet and Treasury Thrull (which kinda sucks, anyway), but then you wouldn't be able to keep Endrek as your Commander if you went .

Also, check out this link for excellent tribal support: The Bones To Build Your Tribal Deck