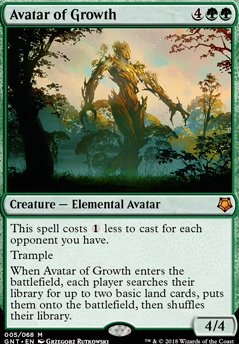 This spell costs less to cast for each opponent you have.

I am Inevitable
by ChickenBoy13 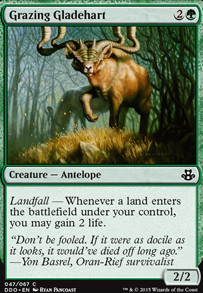 Kill them With Kindness
by DemonDragonJ

Hello! Awesome deck. I really like the idea of mill as a win con. Unfortunately I have to point out that Avatar of Growth says "up to two" lands for the search, so if they are aware they are going to take a beating from sire/yarok they can just choose to get no lands. While in that scenario is still gets you 2 lands, you may want to consider swapping in something else.

dingusdingo, my voice of reason! Just about every piece of advice/ suggestions you made was completely logical. I was actually looking at my avg CMC today, trying to think how I wanted to tackle that problem. Dont get me wrong, avg 4cmc is playable in commander all the way, but it is often clunky and inconsistent. It is important to note that commander is not always about the most optimal plays, but the fun and powerful ones. That being said, I am going to heed much of your advice because I have not been super happy with the curve of the deck.

As I mentioned in the Primer, the point of the deck is to abuse ETBs of my Elementals. Yes, I know Eternal Witness is a better card, but I chose to run Greenwarden of Murasa because of the flavor. Avatar of Growth is another flavor card in my deck that I want to try out before i cut it. I know it helps my opponents, but I'm the landfall deck and can draw two cards off it as well. Also, it will cost 3cmc most of the time.

I've never hurd someone say Pyroclasm out classes Blasphemous Act . It doesn't in my meta at least. Big creatures are all over the place where I play.

The rest of you logic infind extremely sound. I think I am going to call my Signants for all 2cmc ramp spells, as well as Maelstrom Wanderer and Sunbird's Invocation for lower cmc spells.

Decimate, Zendikar's Roil and Tyrant of Discord were also weak spots for me.

What do you think about adding Heroic Intervention and Release to the Wind here?

Thank you again for the feedback and Upvote! I look forward to hearing from you some more!

Everything else that is 4+ CMC you should highly consider cutting too. Your average CMC is extremely high at 4.16. Even with land tutor density and high land count, you're going to spend turns 1-4 doing absolutely nothing to advance your game plan. You should consider that not all elementals have the same usefulness for generating a win, so you need to up tutor density and draw effects to smooth out your games. You should also really consider a counterspell package since you have blue.

Myriad Landscape is a nice idea but slow. Cut. I don't like any of your ETB tapped lands, they cost you turns and don't generate enough advantage for it to be worthwhile. I'm not wild about the ravnica bouncelands either, but they can combo with the commander for card advantage, so I think they're worthwhile enough.

I'm not a fan of Bane of Progress or Avatar of Growth . You should run cheaper, guaranteed effects that do those things in those slots. Bane resets its own counters if you blink it, and Avatar helps your opponents as well, neither of them is a fantastic beater.

Greenwarden of Murasa has a nice effect, but you should slot Eternal Witness instead. 3 CMC cheaper so its easier to combo with repeatedly. Greenwarden is tribal and can beat, but anytime you blink it, it can't attack, and its 6 CMC for a recursion effect.

Tyrant of Discord is another similarly flashy card at too high a price. 7 CMC for an unreliable wipe is just not worthwhile. You need your boardwipes to be castable when you're in a crisis situation, not a cherry on top of strong board advantage for a win. Cut.

You run a very high density of creature copys. Spark Double is great because you can copy the commander and get extra draws and counters. Not a fan of Clever Impersonator or Progenitor Mimic . I would much rather see extra creature tutors in those slots to create a strong board state, these copies currently feel like "win more" creatures.

You should consider some more 2 CMC spell ramp to help curve into a turn 3 commander. Nature's Lore and Three Visits are both great includes, there's also Rampant Growth for budget.

Not a fan of Blasphemous Act either. Run Pyroclasm or similar instead. Easier to cast as spot removal, and 2 damage is enough to take out the majority of threats or creature based ramp/draw that land on turns 1-4. It also doesn't wipe your own board when its cast later. Similarly, Decimate is slow to cast (4CMC sorcery) and can potentially backfire (you MUST choose a target for each, so you may have to choose one of your own). Replace with Naturalize or something similar.

There are certainly some other cards I'd like to see in this build too. Exploration Ghostly Flicker Displace Waterlogged Grove Fiery Islet Lotus Cobra and some counterspells. Also consider adding in some 1 drop mana producers even if they are outside tribal, Llanowar Elves Elvish Mystic Fyndhorn Elves Birds of Paradise Wild Growth Utopia Sprawl

Well Avatar of Growth is sort of group huggy so it's probably not cEDH worthy. But I play with a casual group for fun with good and bad decks and it especially helps the bad decks with a high cmc as well as people who are mana screwed from a bad mulligan. I imagine games are faster and more dramatic when everyone has mana in a 4 player scenario. The good part is that hopefully your deck has more synergy with lands than the others so you should gain more. Again I haven't tried it, but I'm looking forward to it!

Rasmusmv: I am new to the Elemental Tribal scene so the advice is appreciated! (I run Omnath, Locus of Rage as a landfall/burn build). I will be adding Cavalier of Thorns as soon as it is updated on Tappedout. The card seems really sweet! It is a shame you have to exile him for the second ability...

I've been looking at Avatar of Growth ... do you think give your opponents lands is to much? I guess you do get more benefit if you draw two cards off of it... this on T6 with Wet_nath in play mean two cards! You really got me thinking now! Thanks!

I play a Horde of Notions decks and I recently discovered Avatar of Growth . Havent' tested it yet, but it seems it would be a fun option here especially in 4-people pods. Also your missing Cavalier of Thorns; the land synergy is nice with the commander, and the graveyard has synerg with other cards such as Titania, Protector of Argoth etc.

Cards I was thinking of for your enabler deck: Upwelling Fractured Identity Avatar of Growth Tempt with Discovery Minds Aglow